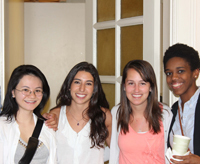 Junior Ellen Carroll and senior Rian Dineen from Notre Dame’s College of Arts and Letters were among a select group of students invited to the national Philosophy, Politics, and Economics (PPE) Undergraduate Colloquium this spring.

“This was a great opportunity for our students to broaden their intellectual networks through seminar work with their peers from other universities, including Duke, North Carolina, Penn, Tulane, Virginia, and Yale,” says John Roos, director of Notre Dame’s PPE minor.

Accepting just 16 students a year, the Arts and Letters program focuses on the intersection of political theory, political philosophy, and economic theory, helping students acquire fluency in each discipline and providing a forum where all three disciplines can be brought to bear on common problems. 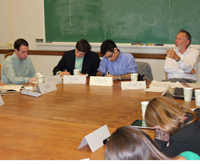 As both philosophy majors and PPE minors, Carroll and Dineen prepared for the colloquium by reading three papers assigned by Professor Geoffrey Brennan, co-director of the joint PPE program at the University of North Carolina and Duke University. The papers addressed the topics of alienation, political action, and sweatshop labor, respectively.

“They each kind of built onto each other,” Dineen says. “These three seemingly separate papers actually had common threads throughout them. And we had an interesting conversation about how the three disciplines can be integrated into a way of looking at things.”

Discussions at the colloquium were enriched, Carroll says, by the fact that participants came from a broad range of schools.

“It was interesting to hear other students’ perspectives on some of the things we’ve learned in our PPE program that have been taught differently elsewhere,” she says. “We discussed topics that all of us have learned a little bit about before, but we were coming at them from different places.”

In addition to formal academic discussions, the conference gave students many opportunities to network and engage in informal discussions with fellow students and faculty.

Carroll says the experience fueled her enthusiasm for PPE and inspired some ideas for a senior thesis and some possible post-graduation plans.

“I enjoyed meeting kids from all over the country and hearing what they’re doing because a lot of them were graduating seniors,” she says. “One just got into grad school at Yale and Duke, one is going to go to Harvard’s Kennedy School of Government.

“Before this program I had never met anyone who’s in a PPE program at any other school,” she says, “so it is cool to now know people all over the country who all have really exciting plans lined up.”