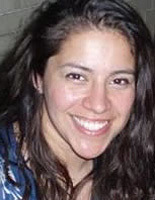 Stephanie Garza, a 2005 University of Notre Dame alumna, received the Cardinal Bernardin New Leadership Award from the Catholic Campaign for Human Development (CCHD) during the Nov. 10 fall meeting of the United States Conference of Catholic Bishops (USCCB) in Baltimore.

Garza, the daughter of an immigrant father and a Mexican-American mother, received the award for her work in the Southwest Organizing Project in Chicago, which receives CCHD funding.

“Stephanie is a clear example of a young leader who is inspired by her faith to empower low-income people to work together to address the root causes of poverty in their communities,” said Bishop Roger P. Morin, who chairs the bishops’ committee in charge of the CCHD. “Her example and witness inspires us all, and I congratulate Stephanie and her family for the achievements that have led to this important honor.”

Established in 1998, the Cardinal Bernardin New Leadership award honors a Catholic between the ages of 18 and 30 who demonstrates leadership in fighting poverty and injustice in the United States through community-based solutions.

Originally published by Michael O. Garvey at newsinfo.nd.edu on November 25, 2008.