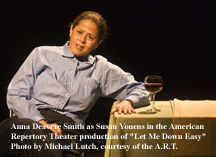 Most people journey to the theater to escape reality. What if, however, the play that you attend includes a representation of you?

“Let Me Down Easy” is a one-woman show by Smith, a Pulitzer Prize nominee and two-time Tony Award nominee. Despite appearing in popular television series such as “The West Wing” and “The Practice,” and films like “The American President,” “Philadelphia” and “Rent,” Smith is best known for her “documentary theater” style featured in her latest play, which ran at the American Repertory Theatre in Cambridge, Mass., from Sept.12 to Oct. 11.

“Let Me Down Easy” is different from Smith’s other documentary theater plays, Youens said, because it seeks to “go on a quest that is more lyrical and personal on the theme of grace.”

In the “Author’s Notes” section of the play’s program, Smith writes of her several-year journey around the world interviewing both marginalized and idolized members of society and exploring the resilience and vulnerability of the human body. She cites Harvard professor Michael Sandel’s assertion that “the gifts and burdens human beings have are handed out randomly” and notes that she came to ask “Where’s the grace in it all?” That is the question “Let Me Down Easy” seeks to answer.

Smith interviews a variety of people for her plays and then impersonates them on stage, changing personas throughout the evening. “Let Me Down Easy” features Smith as Ann Richards, former governor of Texas; Samantha Power, writer, Harvard professor and human rights activist; the imam of the al-Farah Mosque in New York City; Peter Gomes, the Pusey Minister at Harvard University; the rabbi of the Sinai Temple in Los Angeles; the director of an orphanage in Johannesburg; and two musicians: the opera singer Jessye Norman and Youens.

“To say that I’m stunned at finding myself in such company,” Youens said, “is an understatement.”

Youens’ journey as a character began in late August when she consented to an interview about the music of Franz Schubert, her area of scholarly expertise. She had not heard of Smith’s theater work prior to her interview but had a “thoroughly pleasant two-hour conversation” with the playwright. When she found out that the material Smith collected was meant to form a character in one of her acclaimed plays, Youens said she was “very surprised, but quite honored.”

While Youens herself has not attended a performance, she has been told the part about her is “downright seraphic.”

“Evidently,” Youens remarked, “I have a bit more of a Texas accent in the drama than I do in real life (my students might disagree), but that is a small price to pay for such an unexpected and happy privilege.”

Originally published by Kathleen McDonnell at newsinfo.nd.edu on November 17, 2008.