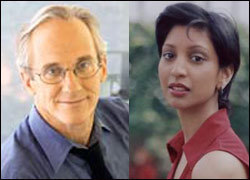 Tom Bettag, a 1966 University of Notre Dame graduate and executive producer of The Koppel Group for Discovery Networks, and Gita Pullapilly, a 1999 graduate and documentary film producer for Dungby Productions, will provide an inside look at how expert storytelling shapes reality for television and film at 7:30p.m. Oct. 31 (Friday) in the Browning Cinema of Notre Dame’s DeBartolo Performing Arts Center.

Presented by the Notre Dame Alumni Association’s iNDustry Alliance and the University’s Department of Film, Television and Theatre, “The Storytellers: Documenting Reality” is a free, but ticketed event open to the public. Ticket information is available by contacting the DeBartolo Center ticket office at 574-631-2800.

Bettag is the recipient of six duPont-Columbia University Silver Batons, three Overseas Press Club Awards and 30 Emmys. In 2004, he was awarded Quinnipiac University’s Fred Friendly Award, which honors journalists who have shown courage and forthrightness in preserving First Amendment rights.

Pullapilly, who has produced seven films in the United States, Jordan and India, will present a rough-cut screening of her documentary “The Way We Get By.”

Currently a WGBH Filmmaker in Residence in Boston, Pullapilly began her career in television news at the CBS affiliate in Green Bay, Wis. Since then, she has traveled the world as a filmmaker and journalist, including a 2005 trip to Jordan for which she produced a documentary on Palestinian refugee camps as a Fulbright Senior Scholar.

Pullapilly is the recipient of a Notre Dame Asian American Alumni Association exemplar award and has earned two Associated Press awards for her feature stories, as well as three Telly awards. Earlier this year, she was inducted into the Royal Society of the Arts and received a Kaiser Mini-Fellowship to highlight HIV/AIDS in rural Ukraine.

The iNDustry Alliance connects Notre Dame alumni in the media and entertainment industries to support networking opportunities and career development for professionals, and provides mentoring for current Notre Dame students.