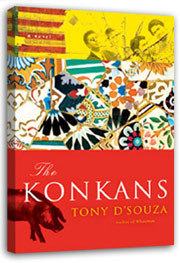 Tony D’Souza, award-winning author and University of Notre Dame graduate, will read from his latest novel “The Konkans” March 12 (Wednesday) at 7:30p.m. in the hospitality room of Reckers in the University’s South Dining Hall.

Sponsored by Notre Dame’s Creative Writing Program, the event is free and open to the public.

In “The Konkans,” Francisco D’Sai is a firstborn son of a firstborn son — all the way back to the beginning of a long line of proud Konkans, known as the “Jews of India.” The Konkans kneeled before the Portuguese explorer Vasco da Gama’s sword and before Saint Francis Xavier’s cross, abandoned their Hindu traditions, and became Catholics. In 1973, protagonist Francisco’s Konkan father, Lawrence, and American mother, Denise, moved to Chicago, where Francisco was born. His father, who does his best to assimilate into American culture, drinks a lot and speaks little, but his mother, who served in the Peace Corps in India, and his Uncle Sam are passionate raconteurs who do their best to preserve the family’s Konkan heritage.

Born and raised in Chicago, D’Souza earned master’s degrees in writing from Notre Dame and Hollins University and served for three years in the Peace Corps in West Africa, where he was a rural AIDS educator.