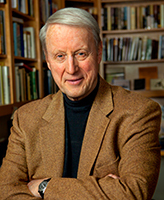 The lecture, which is free and open to the public, will begin at 7 p.m. in the auditorium of the Hesburgh Center for International Studies on campus.

Smith’s most recent book, Who Stole the American Dream?, was published in 2012. In his lecture, “Stealing the Dream: Did We Miss the Big Story?” he’ll address journalism’s role in covering the economic transformations of the past few decades.

A reporter and editor at The New York Times for 26 years, he shared a Pulitzer Prize for Public Service in 1972 as a member of the team responsible for publication of the Pentagon Papers, and in 1974 he won the Pulitzer for international reporting for his coverage of Russia and Eastern Europe.

Besides his newspaper work, Smith has created 26 television documentaries for PBS, two of which received Emmy Awards. He is the author or editor of seven books, three of which — The Russians, The Power Game, and Who Stole the American Dream? — became national bestsellers.

The Red Smith Lecture series honors the 1976 Pulitzer winner in commentary, Walter Wellesley Smith, a 1927 Notre Dame graduate who was a columnist for The New York Times when he died in 1982. Recognized for his literary approach as a sportswriter, Smith composed columns that continue to be anthologized and reprinted. A few months ago, the Library of America published the new collection “American Pastimes: The Very Best of Red Smith.”

John P. and Susan McMeel of Kansas City and Universal Uclick are benefactors of the series. A South Bend native and 1957 Notre Dame graduate, John McMeel is chairman and president of Andrews McMeel Universal, the parent company of Universal Uclick and Andrews McMeel Publishing. He is also a member of the advisory committee of the John W. Gallivan Program in Journalism, Ethics & Democracy at Notre Dame.