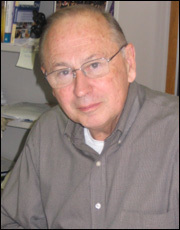 Parenting can be a huge challenge, even in traditional, two-parent households. For low-income, single moms, it can prove overwhelming.

Enter a first-of-its-kind research project at the University of Notre Dame that creates an umbilical cord of sorts from vulnerable, stressed-out moms to family coaches via cell phones. The parenting trainers, or “BFFs” (“Best Friends Forever,” to borrow a phrase from text shorthand), are using phones donated by AT&T Wireless to call and text message daily to remind moms of good parenting strategies they have practiced during in-home weekly meetings.

“We’re trying to figure out if cell phones magnify the impact of a proven parenting intervention on moms’ behaviors, thus increasing or facilitating their children’s development,” explained John Borkowski, co-principal investigator of the project and Notre Dame’s Andrew J. McKenna Family Professor of Psychology. “When you’re dealing with the moms we’re dealing with, compliance is a big problem because they’re under a lot of stress and often aren’t home when we show up for a scheduled parent training session. So the cell phones have the potential of not only making the treatment more effective, but also allowing continual contact with the family coach and reducing attrition.”

AT&T also is covering the phone line charges, while a grant from the Centers for Disease Control and Prevention is supporting the family coaches at Notre Dame’s Center for Children and Families (located at 1602 N. Ironwood Dr. in South Bend) and also at the University of Kansas, which is replicating the study with a different sample of mothers.

There are, in fact, multiple parenting projects underway through Borkowski’s Centers for Prevention of Child Neglect, which involves Notre Dame and Kansas, as well as the University of Alabama at Birmingham, Georgetown University and the University of Texas Health Science Center at Houston.

An earlier project attempted to understand low levels of psychosocial neglect and whether they accumulate to have a negative impact on children’s development, especially school readiness. That data (from 600 participants) is still being analyzed, and in the meantime, some of those same moms have chosen to enroll in the cell phone project and are receiving free phones to enhance their Planned Activities Training (PAT) to improve parenting skills and advance child development. Seventeen local families currently are participating in this first wave of the four-year Notre Dame project, which eventually will include about 180 participants in a rolling enrollment system.

“I am working with seven different moms,” said family coach Starla Ross. “I go into their homes for about an hour of face-to-face contact once a week, then we text a couple times a day about five days a week. This way I know if they’re practicing their PAT steps and which ones they’re using, then give them an encouraging word. I usually do get positive responses about the program.”

“We track where they are, what they’re doing, where the child is, what activities they’ve done, what they’ve eaten and when, and what time they went to bed,” Borkowski detailed.

Although parent training isn’t new, parent training with cell phones is new and, if it succeeds, will offer a solution to problems involved with getting at-risk parents to faithfully attend parenting sessions and utilize their newly learned skills.

“The system is proving very client-friendly,” said Jeanne Mattei, project manager and family coach. “The immediacy of text messaging can be crucial. When we can’t be with the moms on a day-to-day basis, or when they don’t show up at appointments, we can phone or text ideas and reminders and get answers about how their kids are doing.”

It all looks promising, but at this point, Borkowski says results are only anecdotal.

“Our hypothesis is that the cell phones will be an added plus for high-risk moms in terms of their participation in parent training programs such as PAT, their understanding of the importance of responsive parenting, and their implementation of key aspects of the program on a daily basis,” he said. “The ultimate goal is to advance children’s preschool readiness.”