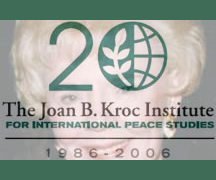 A cake with candles might seem the natural complement to the celebration marking the 20th anniversary of Notre Dame’s Joan B. Kroc Institute for International Peace Studies. But for Scott Appleby, the Regan Director of the institute, a world map with pushpins — 400 of them — would better symbolize its progress.

Four hundred graduates of the institute’s programs are implementing the tenets of peace-building and conflict resolution that they learned in Notre Dame’s classrooms and in Kroc internships throughout the world.

Their pervasive international influence is illustrated by two who received distinguished alumni awards: Oana-Cristina Popa, the Romanian Ambassador to Croatia, and George Wachira, who started the Nairobi Peace Initiative. Both were honored during a banquet and international academic conference earlier this month.

Since the terrorist attacks of Sept. 11, 2001, peace increasingly has been on the minds of young people, and their interest is reflected in a doubling — to 150 — of the number of undergraduates who have declared supplementary peace studies majors and minors.

Appleby has directed the institute for seven years. He is accustomed to being teased for loafing, since world peace seems more elusive than ever. Arms proliferation and the effects of the Cold War were the primary concerns in 1986 when Rev. Theodore M. Hesburgh, C.S.C., then president of Notre Dame, conceived the institute and secured the first of several gifts from McDonald’s restaurants heiress Joan B. Kroc.

No sooner did the Cold War end than the world “exploded” into religious, ethnic and regional wars, Appleby says. The relatively new field of conflict resolution has had to adapt to ever-changing realities as it has worked to establish credibility.

In this business, measures of success are complex. Appleby wryly points out, for example, that one cannot claim victory on the basis of people not killed in conflict. That is a bittersweet measure at best. On a more demonstrably positive side, the increasing influence Kroc faculty George Lopez and David Cortright wield among policymakers is a noteworthy gain.

“George and David went on record many times before the Iraq war to say there were no weapons of mass destruction in Iraq,” Appleby said. “You gain credibility in policy circles by being right.”

One of the institute’s noteworthy research projects is the establishment of an interactive database known as “the matrix” that compares the implementation of peace processes at 40 war zones conflicting sides have gone to the peace table to create settlements.

“We’re providing to peace-accord negotiators and implementers an accessible, `live’ resource of past cases in order to demonstrate what worked and what didn’t,” Appleby said.

Another cause for celebration is the Catholic Peacebuilding Network (CPN), a collaboration with Catholic Relief Services which brings together Catholic peace builders from Colombia, The Philippines, and the Great Lakes region of Africa to share “best practices” and build a theology of just peace. An annual conference assembles a core of about 50 peace builders from those areas to discuss grassroots gains and to explore the unique qualities of religion-based peacekeeping.

Upon her death in 2003, Joan Kroc bequeathed the institute $50 million. The institute first invested in the master’s degree program by doubling its length from one year to two and adding an internship component. Master’s students become familiar with a range of systemic structural problems seen across the world. The internships, then, give them the experience of participating in a culture itself.

On the horizon, the institute hopes to initiate a joint doctoral program in which selected students in history, sociology, psychology and political science earn a concentration in peace research. By Kroc’s 40th anniversary, Appleby would like the institute to be known as the leading educational institution addressing multi-disciplinary alternatives to war and peaceful solutions.

“The Ph.D. programs are important for seeding the field and enlivening research and teaching with a commitment to asking the hard questions about justice and human rights,” he says. “Peace studies programs are opening at many colleges and universities across the country. Kroc should be a leader in training scholars committed to building the bridge between the academic and intellectual life, and a commitment to peace.”

Originally published by Gail Hinchion Mancini at newsinfo.nd.edu on November 28, 2006.