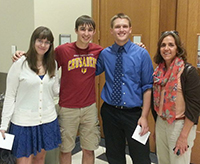 Large crowds can make finding someone on a college campus, while tailgating, or at a concert nearly impossible. But a new app created by a team of Notre Dame students could soon change that.

English and computer applications double major Nicole Brooks used knowledge from both of her fields of study to help turn a friend’s practical idea into a mobile app called Beacon.

Beacon helps users locate friends in large crowds by sending and receiving a password-protected signal from their cell phones. The signal contains the sender’s exact location, and makes meeting up with friends easier.

“It’s a fast, simple way to find someone in a place where you can’t give an address, without compromising your privacy long-term,” says Brooks, a senior in the College of Arts and Letters.

She worked alongside computer engineering major Chris Maheu and electrical engineering major Aaron Crawfis to create the app at the 2013 AT&T/ND Mobile App Hackathon competition at Notre Dame’s Innovation Park. The team was awarded first prize for its work.

It Starts With an Idea

Creating a mobile app is an ambitious project—and creating an app in less than 24 hours is even more challenging. The Hackathon event gave participants just one day to pitch their ideas, form teams, and complete their app.

“Because it was such a limiting time frame, the process for making the app involved a lot of hard decisions about which features were really necessary and which ones were superfluous,” Brooks says.

Each person’s skill set was valuable in creating Beacon, says Brooks. Crawfis presented the original concept, while she and Maheu had previous experience with programming.

“Aaron came up with the idea because he personally wanted to use it to find his friends around campus,” Brooks says. “Chris and I were both interested in the idea, so we teamed up to make his vision a reality.”

Judges announced that the group’s app was one of three finalists at the close of the competition and then declared Beacon the winner at the Notre Dame Mobile Summit the following week.

Thanks to their winning idea, the team members won an all-expense paid trip to Dallas, where they will visit the AT&T foundry in Plano, Texas, along with a cash prize.

While her knowledge of computer programming and technology was essential in creating Beacon, Brooks says her English major was “monumentally useful” in helping her develop and present the app.

“There’s a lot to an app outside of actually making the code—there’s designing the user interface, there’s the psychology of how the hierarchy is set up, and there’s the presentation of the app, among other things,” Brooks says.

“My English major has helped me concisely and accurately describe the app, sell it with my words, and discuss ways to improve and modify it.”

Although Beacon took first prize at the Hackathon, Brooks says she already looks forward to improving upon it. Innovation Park has offered the group business advice and office space for the remainder of the year, which will allow the team to work on incorporating new ideas.

“We’re planning on continue to work there to include all the features we didn’t have time to put in for the actual contest,” Brooks says. “We also have a few business ideas related to the app that we plan on following through with after release.”