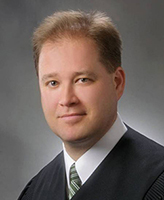 David Certo ’93 had thought about becoming a priest since kindergarten. At the end of his senior year at Notre Dame, the theology and government/international studies major packed up his belongings in Alumni Hall and headed for Mundelein Seminary in Chicago to begin his training for the Archdiocese of Indianapolis.

More than 20 years later, Certo now spends most of his time offering assistance and guidance to some of the most downtrodden and vulnerable members of the Indianapolis community. He feeds the hungry, finds shelter for the homeless, and arranges medical care for the ill.

But Certo isn’t a priest. As presiding judge of the Marion County Superior Court, he doles out his unique brand of ministry from inside a courtroom that is turning heads in Indianapolis for its innovative and compassionate approach to criminal justice.

Certo spent one year in the seminary before taking a health-related leave of absence. Moving back to his home state of Indiana, he took a fellowship in the office of former Democratic Gov. Evan Bayh and quickly grew enamored with government work. Now married with three children and another one on the way, Certo never returned to the seminary.

After his experience in the governor’s office, Certo held a series of positions in state and local government in Indianapolis. He was a staffer at the Department of Environmental Management and later the director of the Indiana Board of Pharmacy. He worked as a policy aide to Indianapolis Mayor Stephen Goldsmith. He earned a law degree in 1999 by taking night classes at the Indiana University School of Law at Indianapolis (now the Indiana University Robert H. McKinney School of Law) and landed a job as an attorney in the state Treasurer’s office. After volunteering on Republican Mitch Daniels’ successful gubernatorial campaign in 2004, Certo was appointed by the new governor to leadership positions at the Bureau of Motor Vehicles and the Department of Natural Resources.

“It began to feel like I couldn’t hold a job because every couple of years I would do something different,” Certo said.

In 2007, Daniels tapped Certo to fill a vacancy on the Marion County Superior Court. After three years in a courtroom that handled domestic violence emergencies, Certo gladly accepted a move in 2010 to the Indianapolis Community Court.

It’s not the most glamorous assignment for a judge: The defendants who come through Certo’s courtroom generally have committed low-level, non-violent crimes in or around downtown Indianapolis. They are sent to Certo after agreeing to do community service or enter a treatment program in exchange for having the charges dropped. Alcoholics, drug addicts, and prostitutes regularly appear before him, and roughly 25 percent of the defendants are homeless.

Certo was not satisfied simply handing out punishments to these offenders, only to watch them return again and again for the same crime. He and his staff, along with an army of community volunteers he has recruited, have developed creative and ambitious programs to address the root causes of the issues plaguing many of these defendants.

“The first free resource we apply is treating people with dignity and respect,” Certo says. “That sends the message that we’re your neighbors and we want to help you because you’re our neighbor.”

Defendants with long histories in the criminal justice system are taken aback by some of the questions and suggestions that greet them in Certo’s courtroom. They aren’t accustomed to having a judge schedule future court appearances based on what’s most convenient for their schedules rather than his own. They’re not used to being offered a free bus pass or a bike to make sure they can get to and from a new job.

The defendants aren’t the only ones noticing. Bill Moreau, a partner at Notre Dame’s outside law firm Barnes & Thornburg and a longtime advocate for the homeless, called Certo’s work at the Community Court “nothing short of remarkable.” Moreau has known Certo since the judge was a young attorney with the Treasurer’s office.

“He could be doing anything with his life. He’s a very well-respected lawyer,” Moreau says. “He could be doing the big law firm routine and obviously earn a lot more than he’s earning now and probably work fewer hours. But he is just a dedicated public servant and the embodiment of Notre Dame’s core values.”

Moreau marvels at some of the initiatives started at the Community Court, including the efforts to find aid for veterans. When Certo took over the court, he added a screening question asking each defendant whether he has served in the military. If the answer is yes, Certo assigns that defendant’s next appearance for a day when a representative from the Department of Veterans Affairs will be at the courthouse, where Certo has given the VA permanent office space. The VA’s involvement is critically important for these veterans who have fallen on hard times, as the organization often can arrange VA housing, medical treatment, job training, and other services.

“If we can get you connected up with the VA, odds are we’ll never see you again,” Certo says.

Mark Mayhew, the veterans justice outreach coordinator at the Indianapolis VA Medical Center, helps veterans facing legal problems in 34 different counties. Mayhew says that he accomplishes as much through Certo’s court as he does in five other counties combined.

“Something that I hear everywhere is, ‘We’re going to consider the individual first.’ But hearing that and seeing it are not always the same thing,” Mayhew says. “The Community Court actually follows through with that statement. “

Certo also is in the final stages of raising funds and recruiting volunteer staff for a new Veterans Treatment Court, a division of his courthouse dedicated to helping veterans deal with mental health, drug addiction, and other issues. “It’s going to be huge,” Mayhew says.

Veterans aren’t the only ones receiving special attention at the Community Court. Certo has set up a mental health unit in the building to offer on-site treatment options for any defendants in need of care.

His most unusual innovation might be the courthouse conference room he converted into a food pantry. This initiative grew out of his concern for the defendants who ended up in his courtroom because of extreme poverty. “If you’re a thief because you’re hungry, you’re not a thief. You’re hungry,” Certo says.

Certo recruited a local Indianapolis parish, St. Joan of Arc, to run the pantry and coordinate volunteers. The effort is funded entirely by private donations, thanks to the 501©(3) they set up to accept contributions.

The pantry, which is stocked with diapers and baby formula in addition to food, is open to the public. “We’re now feeding more people who are not defendants in court than people who are,” Certo says.

Mary Anne Schaefer, the St. Joan of Arc pastoral associate who oversees the food bank’s volunteer efforts, says that Certo takes a hands-on role in the process, even joining the volunteers last Thanksgiving morning when they distributed 400 meals to struggling families. “He’s in there doing just what we do,” she says.

To hear Schaefer tell it, Certo’s work as a judge isn’t far off from his original career path as a priest. “He is walking the Beatitudes,” Schaefer says.

While those that work alongside him heap praise on all he’s done for some of Indianapolis’ poorest residents, Certo credits the defendants themselves for their willingness to enter into rehabilitation programs and seek counseling when it’s often easier just to serve a night or two in jail. The opportunity to help his neighbors turn things around is what makes presiding over the Community Court the most rewarding of the many public service jobs he’s held.

“I love helping people understand that their lives can be better and then helping them realize that potential,” Certo says.