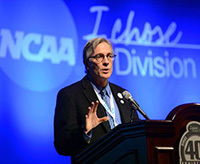 With sports injuries a growing concern, the National Collegiate Athletic Association (NCAA) decided last year to create a centralized medical office to improve safety in college sports nationwide. And they hired a Domer to do it.

At Notre Dame, Hainline took the Arts and Letters pre-med track, which allowed him to study philosophy, too. Although he played on the tennis team, Hainline’s initial interest in medicine came through psychology, not sports.

“When I was studying philosophy, I thought I would do that as my post-graduate work. My junior year, I did a year-long independent study course on Carl Jung and that convinced me I wanted to go into medicine. I thought I was going to study psychiatry and study the mind. But once I got to medical school, I became more interested in neurology.”

Hainline received his medical degree at the University of Chicago’s Pritzker School of Medicine and completed his residency in neurology at The New York Hospital-Cornell Medical Center.

Having established himself in New York as a neurologist, Hainline was asked in 1989 to write a chapter on drug use in athletics. That led to a book co-written with Dr. Gary I. Wadler titled, Drugs and the Athlete. The same year, Hainline became a founding member of the U.S. Tennis Association’s Sport Science Committee and observed the tournament as a neurological consultant.

During the 1991 tournament, a player nearly died of heat stroke. The emergency showed that the USTA needed a cohesive medical plan.

“There were a lot of very good physicians there but no centralized game plan,” Hainline said. “I had helped the USTA to develop a centralized drug-testing and drug education plan and after the ’91 incident I got a call asking if I would be interested in becoming the U.S. Open’s chief medical officer.”

Hainline served as the Open’s chief medical officer until 2007 and then became the chief medical officer for the whole USTA for four years. The switch allowed him to acclimate to large-scale sports medicine and follow an interest in youth sports. The NCAA opening was a natural fit, though he had to give up his practice and the USTA job.

“It was an opportunity to take my focus on youth sports and apply it to college sports,” Hainline said. “The more I thought about it, it became very clear to me that the NCAA was taking this seriously. They’re very committed to making a meaningful change in how we’re dealing with student-athletes.”

Just weeks into the job, Hainline has begun the process of building a Center of Excellence to provide a comprehensive medical resource for schools across the country and implement any new health and safety initiatives.

And with growing concern about head trauma in football and other sports, concussions will certainly be a major focus for Hainline. As a neurologist, he is well-positioned to take strides in making college sports safer.

“One goal is to really develop a broader consensus on concussions in college sports, from understanding it to diagnosing it to managing it and making sense of the different research coming in,” Hainline said. “One of the things that I’m going to be putting together, and we’re already well into it, is a task force of experts from around the country to really look at the data we have and put something together that is more college-specific and set up a longer-term strategy.”

Though some have questioned the future of football in light of concussion research, Hainline sees it adapting and surviving.

“These discussions have been going on since 1905,” Hainline said. “Football by its nature has violence. There is already a concerted effort to look at the rules and see how to make the sport safer. I think that is on everyone’s mind. People love football and it really is part of the American psyche.”

Hainline will also be focusing on the mental health of student-athletes.

“I think we look at student-athletes and we label them and sometimes we treat them as different than other people, but some of them are under enormous pressure,” Hainline said. “Their identities are sometimes completely linked to their sport …. When I talk to student-athlete representatives, that is a significant issue for them.”

Though he will head the NCAA’s efforts to make college sports safer, he will not be doing it alone.

“We want to work from the ground up with the athletic trainers and the strength and conditioning coaches,” Hainline said. “They’re the people that know the student-athletes better than anyone and work closest with them …. I’m a bridge-builder and I work collaboratively with smart people, and that’s what we’ll be doing with concussions and an awful lot of other issues.”