Former English and FTT student Peter Bevacqua ’93 is CEO of the PGA of America.

While buried in work at a large New York City law firm in the late 1990s, then-28-year-old Peter Bevacqua penned a letter to United States Golf Association, asking for a job.

“I was working one of those crazy stretches when I hadn’t gone home in four days other than to take a shower and change my clothes,” recalls Bevacqua ’93. “I was learning a lot but I wasn’t loving it, and I said to myself, ‘I’ve got to pursue my passion.’”

Almost 11 months passed with no response, Bevacqua assumed they had pitched his letter. But then he got a phone call inviting him to interview for the organization’s in-house lawyer position. He rented a car, drove from New York to Far Hills, N.J. and landed the job.

So began his career in the golf industry, which culminated in November when he became Chief Executive Officer of the PGA of America. He previously worked as managing director of the U.S. Open, as well as the USGA’s chief business officer.

When Bevacqua considers the path that led him to a golf-lover’s dream job, he credits his liberal arts education at Notre Dame, which gave him the freedom to let his career naturally take shape, he says.

“It allowed me to keep so many different options open,” says Bevacqua, 42. “There are so many people I’ve seen who are trained well, but trained in one particular area, and that has limited them to such an unbelievable degree and prevented them from ‘calling an audible’ over the course of their career and heading in different directions.” 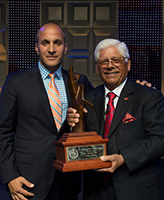 Bevacqua majored in English and also spend a great deal of time in the Department of Film, Television, and Theatre (FTT). As an undergraduate in the College of Arts and Letters he took courses examining the works of Mark Twain, the history of Italian cinema, and Dante’s Inferno. He remembers one FTT course focused on Alfred Hitchcock films, and another that included watching a handful of Bruce Springsteen music videos.

“So much of succeeding in the sports world or business world is being able to have intelligent conversations with people of diverse backgrounds,” says Bevacqua. “When you’ve traveled through the last 1,000 years of literature and the last 100 years of film, you find so many similarities with people. You’re able to have meaningful conversations with them.”

As CEO of the world’s largest sports organization, Bevacqua regularly shakes hands with golf’s biggest stars, and frequently appears on various television programs as the face of PGA.

On a recent Saturday in August, Bevacqua flew from Palm Beach Gardens, Fla. to Rochester, New York for the PGA Championship, where he appeared on the Golf Channel and CBS. The following Tuesday night, he had dinner with Tiger Woods, Phil Mickelson, and Rory McIIroy.

“I don’t take it for granted,” says Bevacqua, a lifelong golf lover who started caddying when he was 10 years old near his childhood home in Bedford, N.Y. “I really do consider myself fortunate that I love what I do. … Jobs can be a grind, and if you enjoy what you do, it makes life a heck of a lot easier.” 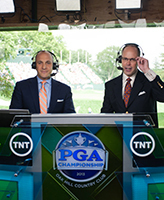 Peter Bevacqua (left) frequently draws on the verbal communications skills he developed in Notre Dame’s College of Arts and Letters.

Bevacqua represents the PGA and its 27,000 golf professionals who promote and teach the game throughout the country. The organization runs the PGA Championship, one of the four major golf tournaments in the country each year, as well as the Ryder Cup. He spends much of his time communicating with members, players, broadcasters, and equipment manufacturers. As CEO, he oversees a staff of about 300 people.

Bevacqua frequently draws on verbal skills he learned while discussing literature and film with his peers at Notre Dame, he says. And, as he develops goals for the PGA of America—such as adding diversity to the game of golf and making it more popular for busy Americans—he continues to rely on his ability to think critically and communicate effectively.

“Notre Dame is such an open, comfortable environment,” he says. “The ability to talk, articulate, speak in front of people—you really first learn that in that classroom setting. That comes in handy and that’s something I’m called on to do repeatedly in front of live crowds, on television, and on radio.”

After Bevacqua graduated from Notre Dame, he felt armed with a broad knowledge base and a wide array of possible career paths, he says. He worked as a teacher at a private school in Greenwich, Conn. for one year, and then debated going to film school or law school. He chose the latter, attending Georgetown University Law Center.

“What I love about the English major and the Arts and Letters background is you still have so many options when you get out of Notre Dame,” he says. “You’re not forced to make that decision so early in your life. If I was pigeon-holed, I wouldn’t be in the golf industry. I wouldn’t have had the flexibility to go into that profession.”

Bevacqua advises current students to resist worrying about exactly what their job will be when they graduate. Instead, he says, students should study what interests them, and study it well.

“Life will dictate its own course. You will find your direction,” he says. “So many people try to rush that decision and fall into an area that they’re not meant to be in. You don’t have to decide what you’re going to do with your life at 21.”