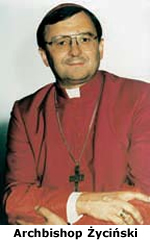 Archbishop Jzef ?yci?ski of Lublin, Poland, will visit the University of Notre Dame from Oct. 31 to Nov. 3 (Tuesday to Friday) and on Nov. 1 will present the University’s 2006 Nanovic Institute Distinguished European Lecture and participate in a public forum on evolution and Catholicism. Both events are free and open to the public.

The Nanovic lecture will take place at 8p.m. in the auditorium of the University’s Hesburgh Center for International Studies. Titled “Neighbors? Jews and Catholics in Post-Shoah Poland,” the presentation is sponsored by the Nanovic Institute.

The public forum, sponsored by Notre Dame’s Reilly Center for Science, Technology and Values; Nanovic Institute for European Studies; Jacques Maritain Center; Departments of Biology, Theology, Philosophy and the Program of Liberal Studies, is titled “Evolution and Catholic Faith: Is There a Conflict?” The event will be held from 3 to 4:30p.m. in Room 101 of Notre Dame’s Jordan Hall of Science and will feature remarks from a panel of Notre Dame faculty members, a response from the archbishop, and an audience question-and-answer session. Structured for a general interest audience, this forum will examine this issue in light of some discussions of evolution by the Church that included a meeting at the Vatican in July.

Appointed Archbishop of Lublin in 1997, Archbishop ?yci?ski also serves as grand chancellor of the John Paul II Catholic University of Lublin, where his research focuses on the history and philosophy of science and the relationship between science and evolution. He is the author of the forthcoming book “God and Evolution: Fundamental Questions of Christian Evolutionism.” He has worked to promote Jewish-Catholic relations in the diocese of Lublin.

Ordained to the priesthood in 1972 following studies at the Czestochowa Major Seminary in Krakw, Archbishop ?yci?ski holds degrees in philosophy, theology and the philosophy of science. He has held the Chair of Logic and Methodology at Krakw’s Papal Academy of Theology since 1980 and served as the vice-dean and dean of the academy’s faculty of philosophy from 1982 to 1985 and 1988 to 1990, respectively.

Archbishop ?yci?ski holds numerous public positions, including chair of the Bishops’ Council for the Laity and the Program Committee of KAI (Catholic Information Agency). He also serves on the Polish Bishops’ Commissions for the Doctrine of the Faith and for Pastoral Care and holds memberships in the Russian Academy of Natural Sciences, the Committee for Philosophical Studies of the Polish Academy of Sciences (PAN), and PAN’s Committee on Evolutionary and Theoretical Biology.

Archbishop ?yci?ski is the author of 40 books and more than 350 published journal articles. He founded the journal series “Philosophy in Science,” published by PAN, the Vatican Observatory and the University of Arizona.

Established in 1993 by a benefaction from Robert S. and Elizabeth Nanovic, the Nanovic Institute sponsors cross-disciplinary discussion and research in European studies.