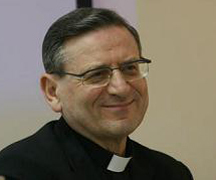 Archbishop Angelo Amato, Prefect of the Congregation for the Causes of Saints, will preside and preach at Mass at 10 a.m. Jan. 25 (Sunday) in the University of Notre Dame’s Basilica of the Sacred Heart. The Mass will observe the feast of the Conversion of St. Paul the Apostle.

Archbishop Amato also will give a lecture on “Catholicism and Secularism in Contemporary Europe” at 7:30p.m. Jan. 26 (Monday) in the auditorium of the Hesburgh Center for International Studies. The lecture is sponsored by Notre Dame’s Nanovic Institute for European Studies as one of its annual Terrence M. Keeley Vatican lectures.

In his present position, to which he was appointed by Pope Benedict last July, Archbishop Amato oversees the process of the official canonization of Catholic saints. Prior to that appointment, he had been the secretary for the Congregation of the Doctrine of Faith, of which Cardinal Joseph Ratzinger was prefect before his election to the papacy in 2005.

Originally published by Michael O. Garvey at newsinfo.nd.edu on January 21, 2009.