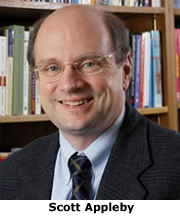 R. Scott Appleby, John M. Regan Jr. Director of the University of Notre Dame’s Kroc Institute for International Peace Studies and professor of history, is among the “leading thinkers” who offered “21 Solutions to Save the World” for the cover story of the May/June issue of Foreign Policy magazine.

“If meaningful alliances are to be made among societies that have recently clashed or harbor historic resentment, religion – like it or not – must play a central role. And no bridging of people could be more effective than a Muslim-Catholic alliance.”

Published by the Carnegie Endowment for Peace, Foreign Policy has a worldwide readership of 10 million. Other leading thinkers writing in the new issue include Joseph S. Nye Jr. of Harvard University (on anti-Americanism), Bill McKibben of Middlebury College (on global warming), Jeffrey D. Sachs of Columbia University (on malaria) and Amy Myers Jaffe of Rice University (on oil dependency).

“We live in an age of anxiety,” the magazine’s editors wrote. “People everywhere fear the next terrorist attack. Meanwhile, we slowly grow numb to Iraq’s endless string of kidnappings and suicide bombings. Between bird flu, tsunamis and loose nukes, our list of fears is getting longer. So, we asked 21 leading thinkers: What is one solution that would make the world a better place? Here are their answers.”

A member of the Notre Dame faculty since 1994, Appleby was graduated from the University in 1978 and holds master’s and doctoral degrees from the University of Chicago. Before returning to Notre Dame, he chaired the religious studies department of St. Xavier College in Chicago from 1985 to 1987, and he co-directed the Fundamentalism Project, an international public policy study, from 1988 to 1993.

In addition to serving as director of the Kroc Institute, Appleby teaches courses in American religious history and comparative religious movements. He is the author of “The Ambivalence of the Sacred: Religion, Violence and Reconciliation” and “Church and Age Unite! The Modernist Impulse in American Catholicism” and co-author of “Transforming Parish Ministry: The Changing Roles of Clergy, Laity, and Women Religious.” He also is editor of “Spokesmen for the Despised: Fundamentalist Leaders of the Middle East” and co-editor of the five-volume “Fundamentalism Project” and of “Being Right: Conservative Catholics in America.”

Originally published by Joan Fallon &Kyle Chamberlin at newsinfo.nd.edu on May 08, 2007.