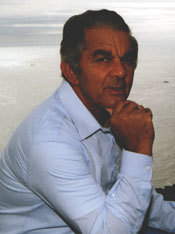 Eddie Daniels, an anti-apartheid activist from South Africa and compatriot of Nelson Mandela, will speak about his book, “There & Back—Robben Island, 1964-1979,” on Tuesday (Sept. 16) at 6p.m. in the Hesburgh Center for International Studies auditorium at the University of Notre Dame.

The book describes Daniels’ defiance of South Africa’s apartheid policy and the 15 years he spent in the infamous Robben Island prison—including three years with Mandela.

A founding member of South Africa’s African Resistance Movement (ARM), which sought to disrupt the regime through attacks on non-human targets, Daniels was sentenced to 15 years in prison in 1964. While incarcerated, he earned his high school degree as well as two degrees from the University of South Africa.

On his release in 1979, he was placed under house arrest and banned for another five years. Later, Daniels was a teacher in Cape Town until his retirement in 1993. His talk, which is free and open to the public, is sponsored by Notre Dame’s Kellogg Institute for International Studies.

Originally published by Elizabeth Rankin at newsinfo.nd.edu on September 15, 2008.