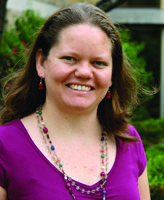 Vania Smith-Oka, assistant professor of anthropology at the University of Notre Dame, has been awarded the Center for Public Anthropology’s Ruth Benedict Global Citizenship Award—an honor granted to just one percent of faculty teaching introductory anthropology courses across the United States.

Smith-Oka was recognized for her involvement with the center’s Community Action Project (CAP), an online, interactive academic forum where students from Notre Dame and approximately 60 other universities and colleges share opinions about ethical issues within the field of anthropology.

“Professor Smith-Oka is to be commended for how she takes classroom knowledge and applies it to real-world challenges, thereby encouraging students to be responsible global citizens,” the award committee notes. “In actively addressing important ethical concerns within anthropology, Professor Smith-Oka is providing students with the thinking and writing skills needed for active citizenship.”

CAP students write newspaper-style op-ed pieces on various ethics questions within the field of anthropology and also have an opportunity to evaluate and rank the submissions of other students participating in the project. The top 20 letters are then sent off to public officials and intellectuals, Smith-Oka says.

Six of the students in her fall 2011 Fundamentals of Social and Cultural Anthropology course wrote opinions that placed in the top 20 out of more than 500 students across the United States and Canada, Smith-Oka says.

And such success is not unusual. In fact, Smith-Oka says, students from Notre Dame’s College of Arts and Letters “have consistently placed within the top 20 every time this competition takes place.”

The letters Smith-Oka’s CAP students wrote focused on the concept of human subjects. Specifically, they were asked to consider whether anthropological work should have a different set of ethical guidelines because of the intimate nature of the research and the importance of questions that can be answered through such intimacy.

Smith-Oka says she is proud of her students and honored to have been recognized for her involvement with the project.

“This award validates my teaching,” she says. “It shows that student engagement with issues beyond their comfort zone is possible.”

In her own scholarship, Smith-Oka specializes in medical anthropology and issues of reproduction, motherhood, physician-patient relationships, and access to healthcare for marginalized populations, especially women in the global south.

“I specifically research the ways that large-scale policies for health and/or development shape the experience and lives of mothers,” Smith-Oka says.

“My current research looks at the healthcare delivery for low-income women at an obstetrics ward in a public hospital in Mexico. Through ethnographic research on topics such as perceptions of risk, use and definition of medical space, and violence in birth, I answer questions about how ‘good’ and ‘bad’ mothers are created, managed, and defined.”

Smith-Oka says her research is inspired by a desire to give a voice to low-income women. She is particularly interested in how society’s classification of these women as “bad” mothers shapes their reproductive lives.

“Society’s determination of who fits the norm and who does not is based on arbitrary characteristics,” she says. “I find out how this definition emerges and then how it affects concepts such as good and bad mothers—which ultimately affects how these women are treated by larger institutions, such as healthcare.”