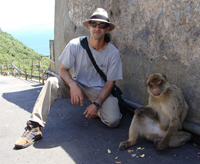 Agustin Fuentes, a professor in the University of Notre Dame’s Department of Anthropology, has been named a fellow of the American Association for the Advancement of Science.

Fuentes is one of 10 Notre Dame faculty members to receive the honor this year, and the only one from the College of Arts and Letters. His colleague, James J. McKenna, Rev. Edmund P. Joyce, C.S.C. Professor of Anthropology and director of Notre Dame’s Mother-Baby Behavioral Sleep Laboratory, was named an AAAS fellow in 2008.

“It’s a great honor,” Fuentes says. “As a social scientist, it’s even doubly exciting because we tend to be marginalized in the science world in some ways, so you really have to be good at what you do. Being nominated and voted in means that my work is having an impact, and there’s no greater reward that thinking you are making a contribution to the broader life of the mind and the development of knowledge.”

Fuentes’ research and teaching interests include the evolution of social complexity in human and primate societies, cooperation and conflict negotiation, human diversity, and reproductive behavior and ecology. He is also interested in issues of human-nonhuman primate interactions, disease and pathogen transfer, race, and racism.

His recent books include Evolution of Human Behavior, which focuses on how and why humans evolved behaviorally, and Health, Risk, and Adversity, which provides a comparative approach to the analysis of health disparities and human adaptability and examines the pathways that lead to unequal health outcomes.

The AAAS is the largest international body of professional scientists in the world and publisher of the prestigious journal Science. According to the association, fellows are recognized “for meritorious efforts to advance science or its applications.”

The association will honor its newest fellows on February 19 during its 2011 annual meeting in Washington, D.C.