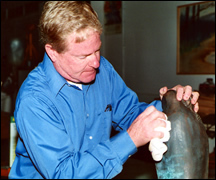 A men’s residence hall once stood on the hill above the north shore of Notre Dame’s Saint Mary’s Lake, occupying a building erected in 1885 to house the seminary for the Congregation of Holy Cross. From 1967 to 1990, when it was evacuated for demolition, Holy Cross Hall was the poorly heated and leaky home of a colorful community of undergraduate men who gloried in their evocative campus nickname, “The Hogs.”

The hill, around which Notre Dame historian Rev. Arthur J. Hope, C.S.C., long ago noticed “an atmosphere of deep religious peace,” is more sparsely populated now. A carefully tended – and regularly visited – statue of Saint Therese of Lisieux nests in a cluster of bushes and day lilies on the south slope of the hill. At the top, just south of the Holy Cross community cemetery, is the Holy Cross Annex, a haven for artistic inspiration and production.

A half-century-old Butler building, the annex housed a gymnasium, handball courts and a few classrooms in the days before the seminary’s relocation to the east, and a few scenes from the now classic film “Rudy” were shot there in 1993. But for the last dozen years, it has been what Rev. Austin Collins, C.S.C., associate professor of art, art history and design, laughingly calls “the Holy Cross atelier.”

Father Collins, whose stark sculptural arrangement of praying figures called “Steelworkers’ Chapel” agreeably shares the crest of the Holy Cross Hill with a thicket of sycamores and pine saplings, is one of a group of artist-priests of the Congregation of Holy Cross who have since the mid-1990s availed themselves of the capacious and well-lit rooms of the annex, transforming them into studios for their work in the visual arts. The only idle tenants are Father Collins’ dog, a Dalmatian named Taxi, and two grey cats, Bernini and Caravaggio.

Father Collins, his fellow sculptor Rev. James F. Flanigan, C.S.C.; painters Rev. Martin Lam Ngyuen, C.S.C., and Rev. Mark Ghyselinck, C.S.C.; woodcarver Rev. Herbert C. Yost, C.S.C.; videographer Rev. Steve Gibson, C.S.C.; and architect Rev. Richard Bullene, C.S.C., are the inheritors and advocates of a tradition exemplified by the late Rev. Anthony J. Lauck, C.S.C., whose “Our Lady of the University” statue has stood at the center of the Main Circle for the last half century and whose “Visitation” sculpture stands beside the Eck Visitors’ Center.

Father Lauck, who persuaded his former teacher, Croatian sculptor Ivan Mestrovic, to take up a fruitful residence on campus in 1955, has been called Notre Dame’s “Father of Art.” The sobriquet seems reasonable to anyone who has admired Mestrovic’s “Pieta” in the Basilica of the Sacred Heart, or his “Jesus and the Woman at the Well” in front of O’Shaughnessy Hall. Father Lauck’s artistic legacy also includes five angels in the facet stained glass of the two-story windows on the south wall of Moreau Seminary, and the Snite Museum of Art, whose predecessor Father Lauck opened in O’Shaughnessy in 1952.

Like today’s generation of Holy Cross artists, Father Lauck forged studios from unused space in remote areas of the campus to stir “the senses to give wings to the soul, to raise it above petty things and fleeting troubles toward the eternal, toward the only true Good, God.” He loved those words of Pope Pius XII and made of them a sort of manifesto. When asked to choose a favorite from among his works, he said simply, “Whatever you’re doing this moment is what you give all you’ve got into.”

To browse the nooks and crannies of the Holy Cross Annex, negotiating the pleasant disorder of the most recent Holy Cross artists at work, is to gain a sharper sense of what Father Lauck and Pope Pius meant.

Originally published by Michael O. Garvey at newsinfo.nd.edu on September 27, 2005.