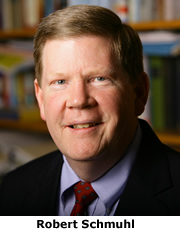 “In So Many Words: Arguments and Adventures” is the title of a new book by Robert Schmuhl, Walter H. Annenberg-Edmund P. Joyce Professor of American Studies and Journalism at the University of Notre Dame.

Published by Notre Dame Press, “In So Many Words” brings together nearly 40 of Schmuhl’s previously published essays on politics, journalism and American culture, which have appeared in magazines and newspapers across the country, including the Washington Post, Chicago Tribune, Boston Globe and the American Journalism Review.

Arranged thematically, the essays are divided into three sections: Matters Political and Journalistic, Matters Literary, and Matters Personal, offering readers a range of issues, from an examination of contemporary political life to the current state of journalism. Schmuhl introduces each section with an explanatory preview and adds postscript reflections at the end of the essays.

“Bob Schmuhl is the guy I read when I want to understand how things political, cultural and journalistic interact — and how the world works as a result,” says Pittsburgh Post-Gazette executive editor and Pulitzer-Prize winner David M. Shribman.

“He’s an analyst who is cool and collected, and so it’s cool to know that he’s collected, between cloth covers.”

A member of the Notre Dame faculty since 1980, Schmuhl is chair of the Department of American Studies and director of the John W. Gallivan Program in Journalism, Ethics and Democracy. He is the author or editor of 10 books, including “Statecraft and Stagecraft: American Political Life in the Age of Personality,” “Wounded Titans: American Presidents and the Perils of Power” and “Indecent Liberties.” He also serves as a national political analyst for print and broadcast media.

Originally published by Susan Guibert at newsinfo.nd.edu on September 08, 2006.