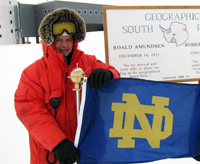 On one of his six journeys to Antarctica as part of a team seeking to unravel mysteries of the universe, Michael Zernick ’83 brought along a University of Notre Dame flag.

“I am proud to have graduated from Notre Dame,” he says, adding that “the University even has influence all the way to the South Pole.”

Zernick’s five-week Antarctic trips, the last of which took place in December 2010, were part of his recent role as the quality manager for a project called IceCube, the world’s largest neutrino observatory.

“When I was an undergrad, I never dreamed that I would be working at the South Pole—my American Studies degree opened more doors for me than I ever could have imagined.” 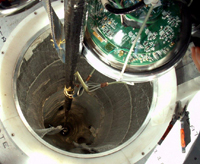 His role in the project was to assist in the development of safety procedures and then make certain that they were being followed. Weather conditions were extreme, and the stakes were high, he says.

“We did not want to have anyone get hurt. It was 22 hours away from the nearest trauma center back in Christchurch, New Zealand.”

“My humanities-based education at Notre Dame made it so much easier for me to hone in on the people side of quality and safety work,” he says. “The technical aspects are important, but the best processes in the world are those that do not lose sight of the human element.”

Adds Zernick, “The love and support of my wife, Melissa, and my daughters, Meghan, Jeni, and Emily got me through at the South Pole.” 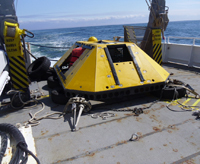 After completing his work on IceCube in spring 2011, Zernick began another National Science Foundation-funded project as quality assurance manager for the Consortium for Ocean Leadership’s Ocean Observatory Initiative.

“We are building a total of six observatories out in the oceans: two off the New England coast, two off of the Pacific Northwest coast, and two off the southern tip of South America,” Zernick says.

“Through the use of sensors attached to buoys, cables, and gliders, we will gather environmental data to determine what’s happening with the ocean, how healthy it is, and other climate impacts.”

Whatever the project, Zernick says his liberal arts background has been essential because it helped him learn to research, analyze, and ask questions—all keys to successful problem solving in his chosen field of quality and safety.

“We do not seek to make the same mistakes twice, but we will if we do not learn from them,” he says. “This philosophy was instilled in me as a student in the College of Arts and Letters.” 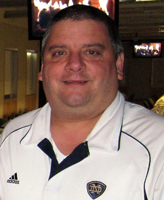 Zernick, whose father Emil ’59, and brother Tom ’84 also attended Notre Dame, says he used his time at the University to explore a wide range of interests.

“American Studies exposed me to the humanities side of things,” he says. “I read so many pieces of literature and history, and when you read about LBJ’s life or Abe Lincoln’s life, for example, you realize that people of humble origins through their own hard work can accomplish great things.

“Plus, I had to learn how to write about what I read,” Zernick adds. “I learned to communicate. I even took a class that interned at the WNDU television station in South Bend so I was exposed to the art of communication through multiple forms of media. And that comes in handy in any line of work.”

Zernick even played the sousaphone in Notre Dame bands, which he says helped him learn about teamwork and collaboration, while science courses he took led to summer jobs with manufacturing firms where he first became interested in quality control.

“While the schoolwork at Notre Dame was not easy for me, inspired by my surroundings, I struggled for perfect grades nevertheless,” he says. “As it turns out, my grades were not perfect, but I graduated because of the solid work ethic instilled in me by my family. The Notre Dame community rewards hard work.”

It’s a lesson this grad has even taken to the ends of the earth.