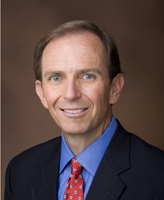 Ted Robinson began honing his craft as a kid, sitting alone in front of a television with the sound off. There, with the door closed, he would announce ball games, imitating Marv Albert, a New York Knicks and Rangers broadcaster, and Lindsey Nelson, who did Mets games and a national replay show for Notre Dame football.

“My first dream was to play, but I came to the realization that I wasn’t good enough to play at a high level, so going to the games and talking about them was a great alternative,” he says.

A 1978 Notre Dame graduate with a B.A. in American Studies, Robinson tells students pursing a career in broadcasting that “the worst thing you can do is go to a broadcasting school.”

“Broadcasting is like acting: eventually an actor has to act,” Robinson says. “The only way you really do this is to do it. But the foundation that you take with you when you get behind a microphone is your education—and there’s no greater foundation than a liberal arts education, the kind that Notre Dame offered me.

“Notre Dame is not regarded as a sports broadcasting factory, but it has a strong legacy of broadcasters and journalists who have contributed to American culture,” Robinson says. “I chose Notre Dame because of the student-run radio station and the outstanding athletics.”

Notre Dame provided both classroom learning and vocational opportunities that proved invaluable to his development as a broadcaster, he says.

“I worked in sports information, I was a team manager on the field for the ‘Rudy’ game, I wrote for The Observer, and, of course, I worked all the time at the radio station. I also got a chance to broadcast hockey for a local station and get paid.”

Those hands-on experiences helped Robinson develop his own broadcasting style, while the liberal arts education he received in the College of Arts and Letters expanded his perspective on the world and enriched his on-air commentary.

“It’s essential that you have the broadest base of knowledge from which to draw when you’re on the air,” he says. “It’s important to remember that the audience is not tuning in to hear political commentary or discussion of a film, but somewhere over the course of a three-hour game there may be an opportunity to weave in a vignette or analogy that adds to the moment.”

Robinson says the most valuable course he took as a student in the University’s College of Arts and Letters was writing—“which is a life skill that translates to every profession.

“Writing for the page is dramatically different than writing for the ear, but the basic skills are the same,” he says. “When I’m on the air, it’s three hours of extemporaneous speech. But I start each broadcast with 45 seconds of points I want to make as if I had written an intelligent 200-word paragraph to lead into a book.”

It’s also imperative to evoke a fan’s passion, Robinson says, but it should be balanced with objectivity.

“People of my time in New York developed a romance for sports broadcasting because we listened to Marv,” he says. “The dramatic presentation in a totally objective manner is the legacy he gave us. We learned that you can let the listener know you want the team to win, but do it in a way that is fair and honest.”

Above all, Robinson urges aspiring broadcasters to be authentic.

“When I listen to one of my old tapes, I cringe because I hear a 21-year-old trying to sound like Marv Albert. Eventually you come to a realization that you have to be yourself. That sounds trite, but it’s a hundred percent true.

“You succeed because you are yourself.”