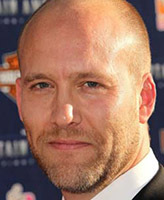 Behind the mask, the cape, and the suit of every superhero stands a seemingly ordinary individual blessed with an incredible gift. Behind Captain America stands Stephen McFeely ’91.

Part of the screenwriting duo behind the Captain America movies, McFeely has worked in the Marvel movie universe since 2008. ND Today had the pleasure of speaking with McFeely as he walked the streets of Cleveland, where Captain America: The Winter Soldier—the second installment of the series—is being filmed.

While the first Captain America movie focused on Cap as a quintessential American hero within his own time, the second movie focuses on him as a man who has awakened more than 60 years in the future.

“In The Winter Soldier, Cap is a man caught out of time. He makes us ask what it would really be like to have all of your friends dead, all you’ve ever known gone,” McFeely says. “Cap’s a guy who can look that squarely in the face.”

In the wake of the popularity of the Captain America revival, McFeely admits that the road to success has not been easy.

McFeely entered Notre Dame with the intention of eventually pursuing a career in law. He only began to consider a career in writing during his junior year in Notre Dame’s College of Arts and Letters, when a distinguished alumnus—Barry Lopez ’66—hosted McFeely’s American Studies class.

“I remember thinking, ‘This guy is amazing. He came to work in blue jeans and boots. That’s a real live author. Maybe I don’t have to be a lawyer,’” McFeely explains.

After graduating with a degree in government and English, McFeely was unsure of his future. Before being hired as a teacher at his high school, he even considered moving to Kuwait for work.

Realizing his passion for writing needed his full attention, he left his teaching job and began going to graduate school full time at the University of California, Davis. It was there that he met his writing partner, Christopher Markus.

“We looked at each other and said, ‘What are you going to do when you get out of here? I don’t know’,” McFeely says. “We had heard maybe you could make a living writing in Los Angeles, so we moved down there and started the pretty familiar process of getting jobs—answering phones, licking stamps—until someone could read our scripts.”

After years of waiting for their break, McFeely and Markus broke on to the writing scene and found their work brought to life in the biopic The Life and Death of Peter Sellers, which won them a Primetime Emmy and further critical acclaim due to their realistic portrayal of the complex Sellers.

With their feet in the door, the pair went on to write the Narnia trilogy, Pain & Gain, and of course, Captain America. Even now, McFeely still feels the same excitement he did with Peter Sellers.

“You know when you see a movie with an audience, and they laugh at the things you thought were funny, sitting in your underwear at a keyboard two years earlier, that’s pretty crazy,” McFeely says.

Hearing actor Robert Redford speak words he’s written, seeing special effects bring to life his vision, and feeling the enjoyment of the audience as they watch his creation has not lessened McFeely’s appreciation for his roots or his blessings. In fact, the joy of living out his dreams fills McFeely to this day with a refreshing sense of gratitude and humility.

“On Halloween when kids in Captain America costumes show up at the door, I get pretty choked up,” McFeely says. “To know you’ve influenced or affected someone—that’s great, it’s all I could hope for.”