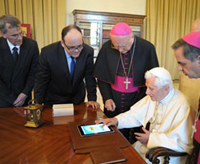 At 6 p.m. on the eve of the feast day of Saints Peter and Paul, Pope Benedict XVI picked up his iPad and, with Thaddeus “TJ” Jones ’89 by his side, revolutionized Vatican media with the launch of News.va and the first Papal tweet.

“Dear Friends, I just launched News.va. Praised be our Lord Jesus Christ! With my prayers and blessings, Benedictus XVI,” he wrote to the 71,000 followers of the Vatican Twitter page.

News.va is a new aggregator website that brings together content from all of the different Vatican news sources into one easily navigable page. Until recently, those who wished to hear news directly from the Vatican had to consult various resources hidden in the media jungle: the official Vatican Newspaper, L’Osservatore Romano; Vatican Radio; Vatican Television; Vatican Information Services; Fides Missionary News; and the official Vatican website.

Jones is the project coordinator for News.va and worked with all of the various media sources, as well as the company that developed the portal, in order to create the site as it exists today.

News.va is also the centerpiece of the Vatican’s social media campaign. On the site, all of the Vatican’s media is sorted by category and popularity, accompanied by audio and video files, and formatted so it can be easily shared via social networks such as Facebook and Twitter. News has an ethical focus, and Jones believes a unique Church viewpoint allows readers to understand the Church’s standing on various events.

A South Bend native and graduate of St. Joseph’s High School, Jones says his time at Notre Dame “impacted him greatly.” While at Notre Dame, Jones lived in Stanford Hall and majored in American Studies and Italian, spending a year in Rome through a Saint Mary’s study abroad program. He said his knowledge of Italian through these experiences has been instrumental for his professional life in Italy. He also cites Notre Dame’s philosophy and theology requirements as especially useful in providing necessary knowledge for working in the Vatican.

After graduating, he began working in Rome. He started at Vatican radio, where he worked for 10 years before taking a sabbatical. In 2003, he returned from his sabbatical and began working as an official at the Pontifical Council on Social Communication.

“My work is primarily in the area of media relations and media policy,” he says. “I follow the work on media ethics as discussed in the various bodies of the U.N., the E.U., and the Council of Europe. My media relations work is mainly involved in assisting television networks with the global broadcasts of papal events in Rome such as Christmas, Easter, the funeral of Pope John Paul II, and the election of Pope Benedict XVI.”

Jones says he has always been fascinated that “there is no contradiction between Catholicism and freedom of inquiry” on Notre Dame’s campus. This sentiment is echoed in his work on News.va, which merges the tradition of Catholicism with technological innovation.

The website is already impressive, yet Jones emphasizes that it is only a small step in a much larger process. The site is already available in Italian, English, and Spanish, with Portuguese and French versions expected to release soon.

“This will make it easy for our message to get out there,” he says. “We are driving our message as well. As an institution, you have to think clearly about engaging in social media. It is a two-way street. It is a challenge.”

There is something a little incongruous about Pope Benedict, now 84, navigating a touch screen in his traditional papal attire. However, Jones reminds us that the Vatican has long been on the forefront of media communications. The Vatican newspaper was founded in 1861 right when printed newspapers were surging in popularity. The Vatican radio station was aided by Guglielmo Marconi, the inventor of long-distance radio, and began broadcasting in 1931. Further, Pope Pius XII allowed a documentary about his life to be produced in the 1950’s, just as televised entertainment was surging.

Jones says he “enjoyed watching the pope try to tap the launch button on the iPad. He was curious, excited, and intrigued by the new technology of the tablet.” The entire evening, he says, “was fascinating, fun, light, exciting, and historic.”

He says his time at Notre Dame “focused on the full formation of the person, on an excellence in education as well as a Catholic formation,” and those valuable years have been instrumental in helping him to revolutionize the face of Vatican media.

“The important thing about social media is remembering who you are,” Jones says.