Rob Cain ’91 is the chief information officer, enabling functions, for The Coca-Cola Company. He is responsible for the technology systems and services required to operate all of the company’s corporate functions, including human resources, finance, global shared services, legal, public relations, community, and strategic security. During a recent visit to campus, the English major shared his thoughts on the value of a liberal arts education from Notre Dame—both as an alumnus and a hiring manager.

College of Arts and Letters: Dean John McGreevy emphasizes the importance of studying what you love as an undergraduate. How has that been your experience? How did you choose your major? 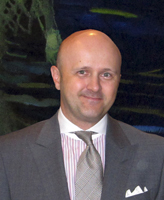 Cain: I can tell you my story very plainly. After my freshman year my father asked me what I wanted to study. I said, I’m thinking about economics or finance. He said, “Why?” and I said, “Because I want to get a job when I graduate.” And he said, “That’s a stupid reason to study something. You will never again in your life have three to four years to study exactly what you want to.” Then he said, “What do you really want to study?” I said, “I love to read and write. I’d love to study English or literature.” So he said, “Then do that—and we’ll figure the job thing out later on.”

Little did I know that he was only half right. Because not only did I study what I loved, but I built a base set of skills that has proven invaluable to me from a career perspective. So I’m very grateful for the advice my father gave me that summer.

AL: In the College, a key part of providing a classic liberal arts education is training students to ask questions, to seek out answers, to do in-depth research and analyze complex information and problems, to write well and speak persuasively. The goal is to help students develop as individuals and as contributing members and leaders of their communities. How this was part of your experience?

Cain: I find the more responsibility that I have been given, the more what I do becomes about people and communicating with people. So the abilities that I honed here—to read and to write and to comprehend and to communicate—have been the single biggest driver, I think, for being successful in different things that I’ve tried.

AL: Including living and working overseas?

Cain: I have now been working in or traveling to 49 countries. I’ve spent the last six years in Berlin, Germany. One of the ways you can succeed abroad is by demonstrating an ability to build relationships, and building relationships has been for me based on the ability to communicate and to understand. And there’s no better foundation for communication or understanding than a degree in the classics, or a foundation in the classics, in my opinion.

AL: How have you witnessed the positive effect this foundation can have in the workplace?

Cain: That’s an easy question. People ask me all the time: “You’re an English major and now you’re a CIO? You’re in a technical role?” You know, I’m in a relationship role. And I’m in a people role. I’m in a role that requires critical thinking and creative solutions to business problems.

I’ve not met anyone yet in the business world that couldn’t be trained in whatever we wanted to train them in, whether it’s finance or technology or accounting. But you can’t really train critical thinking, right? You really have to develop that through education, and I think that that has served me better than anything else.

For me, getting my M.B.A. was like learning another language. It’s like learning a secret handshake to a whole bunch of different disciplines within business. But it doesn’t, or has not for me, superseded the ability to relate to people.

We do a lot of work with consultants, and I find that the consultants who are really creative, critical thinkers, who really help us, more often than not come up through a liberal arts education.

AL: What do you look for when you hire new people or consider employees for promotion?

Cain: There’s the basic stuff in terms of intellectual aptitude, work ethic, but for me I guess the thing that I look at most is the ability to relate to people. I want people who can build relationships, and I want people that can leverage those relationships with critical thinking, with creative ideas.

AL: What has been your experience recruiting and working with graduates of the College of Arts and Letters?

Cain: Clearly there’s an intellectual aptitude that comes with being able to get accepted to and get through the University of Notre Dame. But I find really well-rounded people when I come here to the College of Arts and Letters. The people I talk to—I’m not only impressed with what they’ve studied, but I’m impressed with the inquisitive nature of who they are, the fact that they’re very comfortable asking questions, the fact that they’re very quick at understanding kind of what I do, what we’re looking for, what it takes to be successful.

AL: What is your advice to today’s students?

Cain: I know that there is concern about whether a liberal arts education is the right choice right now in this economy. Let me tell you something. It’s the best choice. In a tough economy, it is important to have the broadest set of marketable skills possible. And the broadest set of skills that one can develop over a four-year undergraduate education comes from the liberal arts.

I would strongly encourage somebody to realize that, unless you have a real passion for a real specialization, you should broaden your base as wide as possible because the jobs you’re going to compete for three or four years from now, half of them probably don’t exist today.

AL: As an investment in yourself, how would you rate your decision to major in liberal arts at Notre Dame?

Cain: For me it was the single best investment that was made. I mean, the advice that I got from my father than I mentioned was invaluable, right? I didn’t know it at the time. I certainly enjoyed studying English more than I would have studying anything else and participating in the London program. But for me it’s paid more dividends than probably any other investment, certainly more than an M.B.A. As I mentioned, that opens doors and provides a “second language,” but it certainly is not anywhere near the investment that I had as being a liberal arts major here, that’s for sure.