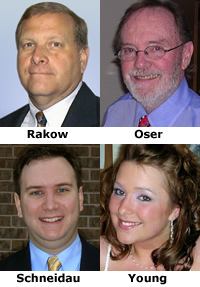 Three University of Notre Dame graduates (one posthumously) and one student will receive special awards from the Notre Dame Alumni Association during ceremonies on campus Thursday (May 3).

The James F. Armstrong Award, which recognizes outstanding service to the University by an employee, will be presented posthumously to Rex Rakow, long-time director of the Notre Dame Security Police Department (NDSP). He received his award shortly before he died of cancer March 7, and it will be rededicated to his widow, Linda.

Appointed assistant director of NDSP in 1979, Rakow was promoted to director in 1985 and served as president of the International Association of Campus Law Enforcement Administrators from 1993 to 1994. He earned his bachelor’s degree in police administration from Indiana University, a master’s degree in institutional administration from Notre Dame in 1982, and completed the FBI National Academy’s management training program in 1983.

George Oser, a 1958 graduate, will receive the Rev. Louis J. Putz, C.S.C., Award, which recognizes the development and implementation of programs that have contributed to improving the lives of others.

The founder and first president of Citizens for Good Schools, an interest group for support of public education in Houston, Oser also is the former president, vice president, secretary and treasurer for the Houston Independent School District. Under his leadership, the board of education established the first magnet schools in Houston, as well as the Houston Community College, and peacefully desegregated the fourth-largest school district in the country. In addition, Oser co-founded Volunteers in Public Schools, which helps screen pre-schoolers for learning disabilities. * *

At the insistence of Father Putz, Oser’s long-time friend and Notre Dame professor, he joined theChristian Family Movement (CFM) and later formed the first official CFM group in the Houston Diocese. A former board member of the city’s Notre Dame Club, he also has served as its coordinator for social services and continuing education. Currently, Oser is retired after spending much of his career as a professor and researcher at the University of Houston and the University of Texas Medical School at Houston.

The Young Alumni Award will be presented to Patrick Schneidau, who earned both his bachelor’s and master of business administration degrees in 2000, for his inspirational accomplishments since he was graduated from Notre Dame.

A former president and treasurer of the Notre Dame Club of Houston, Schneidau’s dedication and leadership strengthened the club’s financial organization, doubled its membership base and expanded club activities. He received a “best practice” honor during last year’s Alumni Senate for his support of the successful Golden Dome Mentors program, which was founded during his tenure as president. He also organized and led the 2003 Vocare Retreat for young alumni living in Houston, San Antonio and Austin.

Currently, Schneidau serves as the director of solutions consulting for PROS Pricing Solutions, which provides consulting and software solutions for companies looking to improve their pricing practices.

Sophomore Whitney Young, a political science and peace studies major from Houston, will receive the Mike Russo Award for her achievements, service to Notre Dame and strength of character.

A member of the Notre Dame Folk Choir, Young also serves as an assistant director of the Spanish Theater Workshop and a show host on the University’s student-run radio station, WVFI. Dedicated to campus service programs, she mentors local middle and high school students in the Take Ten program, and has participated in Center for Social Concerns projects, including the Darfur Rally, World AIDS Day and Gulu Walk. Currently, she is taking a course to prepare for an international summer service program in Chennai, India, and is praised by those who know her for her “warm, caring nature and dedication to making the world a better place.”