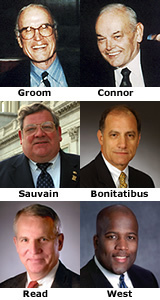 Six University of Notre Dame graduates (one posthumously) will receive special awards from the Notre Dame Alumni Association during ceremonies on campus this month.

Irish football teammates under coach Frank Leahy, Connor and Groom founded the Leahy Scholarship program, which has provided 31 students with scholarships since 1997.

Connor, who died in 2004, played one year of varsity basketball and four years of football, including the 1946, 1947 and 1949 national championship teams. He served for two years in the U.S. Marine Corps and worked as a special agent in the FBI before joining an investment banking firm and later becoming self-employed as a financial consultant. Connor wrote two books recounting the Leahy years at Notre Dame: “Leahy’s Lads” and “Connor: The Life Story of George Connor.”

Groom was team captain of the 1950 Irish football team and a consensus All-American who started at linebacker and center for the 1949 and 1950 teams. He played professionally with the Chicago Cardinals, made a Pro Bowl appearance in 1954, and was inducted into the College Football Hall of Fame in 1994. Following his football career, Groom served as a broadcaster for the Denver Broncos before becoming a vice president with Levi Strauss & Co. Under Groom’s leadership, the sculpture of Frank Leahy, located on the east side of Notre Dame Stadium, was funded through private donations.

After graduating from Notre Dame, Sauvain went to Washington, D.C., earned a master’s degree from George Washington University in 1971, and went to work for several federal agencies. In 1973, he moved to the Appropriations Committee and paralleled that career with one in the U.S. Coast Guard Reserve for 30 years. He was promoted to the rank of captain and earned the Meritorious Service Medal and the National Guard Eagle Award for his role in the U.S. Coast Guard-U.S. National Guard Counter-Drug program.

Honored with the Nyumbani Medallion of Hope for his assistance in the humanitarian fight to bring relief to children with HIV-AIDS in Africa, Sauvain also received an honorary doctor of humane letters degree from Wheeling Jesuit University.

Bonitatibus and Read both are executives with Hibernia National Bank (Capital One) who have demonstrated extensive civic involvement in New Orleans and played active roles in the city’s redevelopment.

West has been responsible for rebuilding the city’s power distribution system in his role of regional manager for distribution operations with Entergy, New Orleans’ electric utility company. He also chairs the Louisiana State University Board of Supervisors.