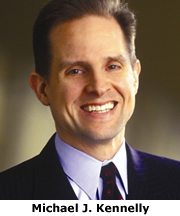 Michael J. Kennelly, a 1985 graduate of the University of Notre Dame, will receive the 2007 William D. Reynolds Award from the Notre Dame Alumni Association during halftime ceremonies of the Blue-Gold football game Saturday (April 21) at Notre Dame Stadium.

Established in 1985, the Reynolds Award is given annually to a Notre Dame graduate for distinguished service to young people.

Kennelly is the founder and chairman of HFS Chicago Scholars, a non profit corporation created in 1991 to help economically disadvantaged Chicago high school students who show academic and leadership promise achieve their educational goals by providing scholarships, tutors and mentors. Under Kennelly’s leadership, HFS has raised millions of dollars in the last 15 years to provide support for thousands of students.

A certified public accountant, Kennelly is managing director of the Huron Consulting Group and also has served on the board of directors of the Big Shoulders Fund, which supports Catholic schools in inner-city Chicago, and the advisory council for the Lawyers’ Committee for Better Housing.

Kennelly and his wife, Stephanie, have a son, Joshua, and daughter, Jaden.