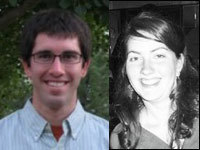 Patrick Reidy, a senior from Greenwood Village, Colo., and Brenna Casey, a master’s degree candidate in the Creative Writing Program from Waterford, N.Y., have been selected recipients of the University of Notre Dame Alumni Association’s 2007-08 Distinguished Student Award and Distinguished Graduate Student Award for their outstanding academic performance and service to the University.

Reidy, a political science major and theology minor, who has compiled a 3.93 grade point average, will offer the invocation at Notre Dame’s Commencement exercises. He is completing a senior honors thesis on clientelism in Uganda primary education—a topic he examined after receiving two grants to do original research in Uganda last summer.

Reidy’s service to Notre Dame began when he was a first-year student residing in Sorin College. He served as Sorin’s freshman class council representative, was elected hall president, received the Monk Award, as the hall’s “most outstanding freshman,” and currently serves as a resident assistant for the hall.

Reidy has remained dedicated to service throughout his time on campus. He worked as a counselor for high school students through Notre Dame Vision, joined the Millennium Development Initiative student advisory committee, assumed a primary leadership role in the Africa Faith and Justice Network, and served as a team leader for three Campus Ministry retreats.

Perhaps most notable are Reidy’s accomplishments for St. Jude Primary School in Jinja, Uganda, through the Center for Social Concerns’ International Summer Service Learning Program. The school was on the verge of closing five years ago before Reidy single-handedly raised nearly $40,000 and helped Sorin raise an additional $110,000 for improvements. The contributions enabled St. Jude to complete major renovations. Additionally, under Reidy’s influence, Sorin launched its own service project at the Center for the Homeless in South Bend and sponsored three trips to New Orleans to aid victims of Hurricane Katrina. Reidy currently is working on a micro-venturing project with engineering students to aid economic development in Uganda.

Casey, the Creative Writing Program’s Nicholas Sparks fellow, will receive her master of fine arts degree in May. She serves as managing editor of the nationally distributed literary magazine Notre Dame Review and has focused her master’s thesis, a collection of highly original narrative essays, on poverty and cultural difference. One of the essays has been nominated for the Association of Writers and Writing Programs’ national “Intro Journals” contest.

Casey has served Notre Dame both on and off campus. She founded a writing program at South Bend’s Center for the Homeless, and each week for the last two years she has led a dozen other graduate student volunteers at the center. Last year, she organized a reading by the homeless writers at the Center for Social Concerns and later organized a panel presentation and presented a paper on the homeless writing group at the annual meeting of the national Association of Writers and Writing Programs.

On campus, Casey served on the advisory board of the inaugural women writers’ conference, an event designed to bring significant women writers to Notre Dame.