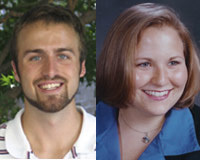 Peter Quaranto, a senior from Franklin, Mass., and Mignon Montpetit, a doctoral student in the Department of Psychology from Portage, Ind., have been selected recipients of the University of Notre Dame Alumni Association’s 2005-06 Distinguished Student Award and Distinguished Graduate Student Award.

A political science major and peace studies minor, Quaranto has compiled a 3.9 grade point average in the University’s Honors Program and is a Notre Dame Scholar, National Merit Scholar semifinalist and national Coca-Cola Scholar. He received this year’s Yarrow Award for Undergraduate Peace Studies, and is one of 43 Marshall Scholarship winners for 2006.

After studying in Uganda last year, Quaranto founded the Uganda Conflict Action Network, an advocacy campaign working to bring peace to the war-torn country. As director of the organization, he has served as a commentator on BBC Radio and Chicago Public Radio and published editorials in several newspapers in Uganda and Kenya. In addition, Quaranto participated in an international summer service learning project last year in Cambodia, for which he organized peace building workshops and documented stories of children with HIV/AIDS. He also served as student coordinator for Notre Dame’s Center for Social Concerns program in justice education, and as a political columnist for The Observer, the University’s student-run newspaper.

A recipient of the Senior Recognition Award in Psychology, Mignon was graduated from Notre Dame in 2001, received her master’s degree from the University in 2004 and completed her master’s thesis titled “Self-Concept and Adaptation to Conjugal Loss in Later Life.” Currently, she is a research assistant in the Gerontology Laboratory and a member of the Gerontological Society of America and Psi Chi, the national honor society in psychology.

Mignon has devoted much of her time at Notre Dame to service, both on campus and in the community. She is a co-facilitator of the JustFaith program at Little Flower Parish, coordinates weekly meetings focused on exploring the Catholic perspective on issues of world social justice, and organizes retreats and immersion experiences. She has served as a REAL Services friendly visitor, volunteer at Fountainview Nursing and Rehabilitation Center, and co-president of People Communicating with Kids. During her undergraduate studies she served as a eucharistic minister and lector for both McGlinn Hall and Sacred Heart Basilica.