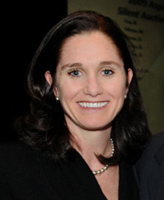 Haley Scott DeMaria, the University of Notre Dame College of Arts and Letters alumna who made an inspiring recovery from critical injuries suffered in a tragic 1992 bus accident involving the Fighting Irish swimming team, will be the principal speaker and the recipient of an honorary degree at Notre Dame’s 167th Commencement Ceremony on May 20.

“The courage, perseverance and faith Haley has demonstrated over the past 20 years have been remarkable and are a shining example for us all,” says Rev. John I. Jenkins, C.S.C., Notre Dame’s president. “She has spoken to scores of groups across the country of the many challenges she faced in recovering from injuries suffered in the accident, always with a focus on God’s grace and the love and support she received from her family, friends and Notre Dame. I’m sure that her words will be as inspirational to our graduates as they have been to so many others.”

DeMaria suffered a broken back and was paralyzed after a bus bringing back the Irish women’s swimming team from a meet at Northwestern University slid off the Indiana Toll Road in a snowstorm about 2 miles from the Notre Dame exit shortly after midnight Jan. 24, 1992.

Meghan Beeler and Colleen Hipp, both freshmen, died in the accident, and most of the other swimmers, coaches and staff were injured, DeMaria the most seriously.

After two operations at Memorial Hospital in South Bend and several days without sensation in her legs, DeMaria and her family were told she likely was facing life in a wheelchair. But a week after the accident, she began to regain feeling and within a month she was able to stand and walk. She returned to classes at Notre Dame that spring, but there were many more challenges ahead.

In the summer of 1992, rods that had been inserted to keep her spine straight came loose and broke through the skin. She was rushed from her home in Phoenix to San Diego where she endured three more complex and risky surgical procedures—and once nearly died on the operating table.

Once again defying all odds, DeMaria returned to Notre Dame in the fall of ’92 to take classes and continue her rehabilitation. She gradually began to swim and a year later, on Oct. 29, 1993, she completed one of the most stirring comebacks in Notre Dame’s history by swimming in—and winning—her heat in a 50-yard race.

She has told her story in a book, What Though the Odds: Haley Scott’s Journey of Faith and Triumph, and has plans for a feature film.

After earning her bachelor’s degree in history from Notre Dame in 1995 (she also has a master’s degree in teaching from USC), DeMaria served as an assistant dean of students, history teacher and assistant swimming coach at her high school alma mater, Xavier College Preparatory in Phoenix. She now lives in Annapolis, Md., with her husband, Jamie DeMaria, a 1995 Notre Dame graduate, and sons James and Edward, and she gives dozens of inspirational presentations annually across the country.

“It is moving, gratifying, and inspiring to speak to people about my recovery,” she has said. “It is a gift to pass along hope.”

DeMaria has received numerous honors through the years for her courageous recovery and return to swimming, including the Spirit of Notre Dame Award, Honda Award for Inspiration, Woman of Courage Award from Xavier, and Gene Autry Courage in Sport Award. She was named Woman of the Year by the National Women’s Leadership Conference in 1994 and a fellow of the Institute for International Sport.

DeMaria is first vice president of the Notre Dame Monogram Club and will serve a two-year term as president from 2013 to 2015. She has chaired the ND Women Connect initiative in the Notre Dame Club of Washington, D.C., and also has been active in the alumni clubs in Maryland, Phoenix and Philadelphia. She is active in her parish, and the DeMarias are a sponsor family with the U.S. Naval Academy, hosting midshipmen in their home several times monthly.

Originally published by Dennis Brown at newsinfo.nd.edu on March 28, 2012.