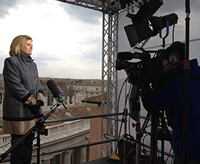 Millions of Americans watched live nightly news coverage of the papal conclave in Vatican City, and if you happened to be watching NBC, you were likely being told the news by a Notre Dame alumna.

Anne Thompson ’79 is NBC’s chief environmental affairs correspondent and has covered stories from the Gulf oil spill to Hurricane Katrina and 9/11. Given her Catholic background and previous reporting on the Church, Thompson was assigned to cover the conclave, much to her excitement.

“I was thrilled,” Thompson says. “And who wouldn’t be? You’re seeing history unfold before your eyes. No Pope had retired in modern Church history. We had the Vatican, which operates on-script so often, completely off-script. It was also a very important time in the history of the Church, facing all kinds of challenges.

“It was a reporter’s dream.”

Thompson had reported from Rome previously, covering the death and funeral of Pope John Paul II. It was a much different experience for her this time.

“The biggest difference was that there was no Pope to mourn,” Thompson says. “When John Paul II died, you had literally millions of people flock to Vatican City to mourn his death. That wasn’t the case this time. What you had was a man who looked at his situation and said, ‘I’m too old to do what the Church needs to be done, so let me step aside’.”

The conclave, notoriously secret, operates under a complete media blackout. Thompson was as in the dark as the rest of the crowd that gathered in Saint Peter’s Square. She said the crowd was surprised by Cardinal Jorge Mario Bergoglio’s election.

“We had been told all along that they were looking for a younger person, someone to excite the global Church and could do the travel required,” Thompson says. “When Cardinal Bergoglio was announced as Pope Francis, you could literally hear people gasp. It was like the entire square went, ‘Huh?’ He was speculated about, but I think most people thought he was too old. Then he came out and he seemed almost shell-shocked …. Then he asked people to pray for him and asked for a moment of silence, and I swear the only thing you could hear were the camera shutters going off.” 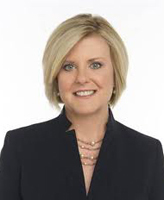 Thompson’s journalistic career started at WNDU in South Bend, where she worked after graduating with an American Studies degree. From South Bend, she proceeded to NBC affiliates in St. Louis and Detroit before joining NBC News as a correspondent. She has reported on topics from the environment to politics to finance, but said the best stories are not defined by a topic.

Having reported on Katrina and 9/11, Thompson is no stranger to covering tragedies. She considers it the toughest part of her job, along with having to condense loads of information into a short report.

“The most difficult part is any time you have to talk to someone who has suffered a personal tragedy,” Thompson says. “That is very, very difficult. I always try to treat people the way I would want my family to be treated if they were in that situation. The second-most difficult part of my job is I get maybe a minute and 40 seconds or, if I’m lucky, two minutes and 10 seconds to explain very complicated subjects.“

As part of the team that covered Katrina for NBC, Thompson received an Emmy award in 2006. She said she developed an affinity for the city of New Orleans and its people while she was there.

“I fell in love with New Orleans then,” Thompson says. “The people of New Orleans are really tough. They get knocked down and they get back up. They live to fight another day and they just don’t quit. I love that spirit. It was the beginning of deep feelings on my part not just for New Orleans but for the state of Louisiana. When I went down there for five months to cover the oil spill, it was the same thing.”

Thompson’s only journalistic experience at Notre Dame was working on the yearbook, The Dome, her junior year. An internship the following summer at WBZ-TV, then NBC’s Boston affiliate, convinced Thompson to pursue news reporting.

Despite 34 years of reporting experience, one aspect of the job continues to bother Thompson: seeing herself on TV.

“It’s always cringe-worthy for me,” she says. “You are your own worst critic. Everything drives me crazy, from the way I look to my voice. I’ve never gotten used to it.”

Thompson says her Notre Dame education still plays a major role in how she approaches stories.

“What I am amazed at about my Notre Dame education is that it’s like a fine wine,” Thompson says. “It gets better every year. Notre Dame doesn’t just educate your mind, it educates your heart and soul.

“I think it is that sense of humanity and compassion that is developed at Notre Dame, along with your mind and intellect. It’s that extra something that Notre Dame gives you that I don’t think you can find anywhere else.”