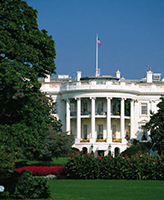 Katie Beirne, a 1998 graduate of the University of Notre Dame, has been appointed deputy director of communications for the White House.

In her senior year, Beirne was one of 38 U.S. students chosen from among more than 800 candidates to receive a Marshall Scholarship—one of the most competitive and prestigious merit scholarships available to undergraduates.

Beirne began her career as an investment banker at Lehman Brothers before moving to Capitol Hill to work for U.S. Senator Charles Schumer, D-New York. Her most recent position was staff director of the Democratic Policy and Communications Center, which Schumer oversees.