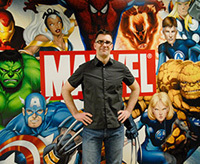 The Spider-Man series, The Avengers, the X-Men series—these films, produced by Marvel Comics’ production company, Marvel Studios, are some of the highest-grossing films of the 21st century. All are based on characters and stories from Marvel comic books, and it’s the job of Bill Rosemann ’93 to keep those characters and stories coming.

Rosemann, an editor at Marvel Comics’ New York office, read comics in his youth and followed that interest at Notre Dame. While majoring in English and writing for The Observer, Rosemann collaborated with biology graduate student and fellow Observer staffer Jay Hosler ’95 Ph.D. on Wired, ND’s first student-produced comic book.

“During my senior year spring break, instead of heading down to Cancun like all my buddies, I came to New York and met with the Marvel staff and passed out my resume,” Rosemann said. “Eventually, the editor of their in-house hype mag called me and said, ‘Hey, I see that you have journalism skills and you know our history. Want to write for us?’ That was my first break …. That’s how I got into Marvel.”

Rosemann freelanced for Marvel from 1993-95 and then worked in marketing for Marvel from 1995-2001, writing press releases and an innovative blog called “Your Man at Marvel,” giving readers an inside look at the company. After leaving Marvel in 2001 to work for competitors CrossGen and DC, he returned six years ago as a full-time editor, fulfilling a lifelong dream.

“From my earliest memories, since kindergarten or before I could even read, I knew I wanted to make comic books,” Rosemann said. “That was my goal. I realized I couldn’t draw as well as the pros, but I had some writing skill and I thought that could somehow be my way in.”

As an editor, Rosemann oversees the creation of new monthly comics as well as new characters and titles. He likens his job to that of a movie producer, though less glamorous.

“When you’re assigned a series or pitch a concept, your first step is to boil the story down to an accessible message or theme.” Rosemann said. “Then, once you understand what you’re saying with your story, you cast it. You bring in the writer and the artist with the styles that are best suited to bring that comic to life. Some are best at huge action stories, while others are good at quiet character dramas …. You try and match up who has the best voice and passion for the specific book.”

Rosemann is also responsible for typical editorial duties such as proofreading and making sure that stories make logical sense. He reviews each comic nearly a dozen times before it is published and distributed.

Currently, Rosemann is focused on the series Avengers Arena. The series revolves around a Hunger Games-style tournament that sixteen young superheroes are forced to participate in by a villain.

Avengers Arena is an example of the effect that movies, and pop culture in general, have had on comics. Rosemann acknowledges that Marvel’s film success has impacted its comics, and vice versa.

“Our West Coast team looks at the comics and we look at the movies …. The creators are influenced by what they see on both sides,” Rosemann said. “In the Avengers movie, for example, Hawkeye had a more realistic costume than his comic book version. In the comics he wore a little skirt flap and these big mask ears, and that just was not going to translate on film. Shortly before the movie came out we gave Hawkeye in the comics a uniform that looked more like his movie costume. When readers come from the movie and pick up a comic book, we want them to recognize the characters and be comfortable with what they see.”

The success of the movies has also revitalized the comic book industry. At the turn of the century, comics were trending more and more toward obscurity. But the movies have renewed interest in the characters, and Rosemann said Marvel is modernizing how they reach readers.

“Now you can go online and download the Marvel app,” Rosemann said. “So if you live in a town without a comic book store, you have a comic book store on your smartphone. You can now download digital comics the same day they come out in print. The movies are introducing new generations to our characters and we’re getting better at connecting them to our comics.”

In the end, though, Rosemann believes the continued and future success of Marvel is assured by characters that have withstood the test of time.

“There’s a reason why Marvel characters have been popular non-stop since the ’60s,” Rosemann said. “Creators like Stan Lee, Jack Kirby and Steve Ditko were channeling the world around them into fun and complex stories that connected with readers.”

In his time at Marvel, Rosemann has been fortunate enough to meet and work with Lee, his real-life hero growing up and an icon in the comics world.

“I did a panel with him at a convention,” Rosemann said. “It was me and Stan for an hour up on stage. He’s just as amazing as you think he is. You read his columns and he’s just like that in real life …. He is still excited by storytelling and the Marvel characters and he loves that so many people are to this day reading them and are inspired by them. It’s one of those rare instances where you meet a hero and he’s everything you thought he would be.”

Rosemann finds his favorite fictional hero in the Spider-Man series, which first appeared in the early ’60s; but he prefers the nerdy, insecure Peter Parker to the cocky web-slinging superhero.

“It’s really not Spider-Man, it’s Peter Parker,” Rosemann said. “That’s a cool thing about Marvel Comics. In some companies’ comics, the mantle of the hero is passed on generation-to-generation and many people have been the hero. But in Marvel, it’s one person. Yes, it’s cool that they’re wearing a costume and that they have powers, but you’re also invested in the person under the mask.”