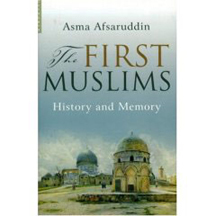 Asma Afsaruddin, associate professor of Arabic and Islamic studies at the University of Notre Dame, is the author of a new book titled “The First Muslims: History and Memory,” which explores how competing images of the earliest Muslims shape current Muslim discourses on critical issues.

Recently published by Oneworld Publications, the book reconstructs the formative period of the Muslim community. It chronicles the lives of the prophet Muhammad, his companions, and the subsequent two generations of Muslims, together known as the salaf or Pious Forbears. It explains the impact of the earliest converts on the development of Islamic doctrine, law and ethics, and examines their status as moral exemplars for succeeding generations.

“The Pious Forbears are invoked in dramatically different ways by liberal Muslims and hard-line Islamists in the contemporary period,” Afsaruddin said. “How their roles are constructed today has an enormous bearing on hot-button issues such as the nature of jihad, issues of governance, changing roles of women, interpretations of the Shari`a, and Muslim relations with Christians and Jews. This is a central concern of the book.”

Afsaruddin specializes in the religious and political thought of Islam, Qur’an and hadith studies, Islamic intellectual history and gender. She previously taught at Harvard University and has served as a visiting scholar at the Centre for Islamic Studies at the University of London. She also is the author of “Excellence and Precedence: Medieval Islamic Discourse on Legitimate Leadership” and editor of “Hermeneutics and Honor: Negotiation of Female `Public’ Space in Islamic/ate Societies.”

A member of Notre Dame’s Department of Classics and faculty fellow in the University’s Kroc Institute for International Peace Studies, Afsaruddin has written more than 50 scholarly articles, book chapters and reviews, and lectures worldwide on Islam and Islamic thought. Her current research on jihad and martyrdom has won support from the Harry Frank Guggenheim Foundation and the Carnegie Corporation of New York, which, in 2005, named her a Carnegie Scholar.