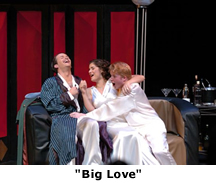 The University of Notre Dame’s Department of Film, Television and Theatre (FTT) will open its 2006-07 theater season with William Shakespeare’s “Hamlet,” performed by international touring troupe Actors From The London Stage, from Sept. 13 to 15 (Wednesday to Friday) at 7:30p.m. in Washington Hall.

Actors From The London Stage has called Notre Dame its American home since 2000, when it relocated from the University of North Carolina. Its members hail from such prestigious theater companies as the Royal Shakespeare Company, the Royal National Theatre of Great Britain and Shakespeare’s Globe Theatre, among others.

The season will continue with the student production “Big Love,” a modern remake of Aeschylus’ “The Suppliant Women,” from Nov. 7 to 12 (Tuesday to Sunday) and 14 to 17 (Tuesday to Friday) in the Philbin Studio Theatre of Notre Dame’s Marie P. DeBartolo Center for the Performing Arts. All performances begin at 7:30p.m. except the Nov. 12 Sunday matinee, which starts at 2:30p.m.

Inspired by Aeschylus’ work, believed to be the earliest surviving play of the western world, Charles L. Mee’s “Big Love” reinvents the classic of Greek theater as an examination of modern-day gender politics. The story focuses on 50 Greek brides who, on the verge of being forced into marriage with their 50 cousins, flee by boat to an Italian villa in search of refuge.

The remaining plays in the FTT season are:

Originally published by Julie Hail Flory at newsinfo.nd.edu on July 17, 2006.