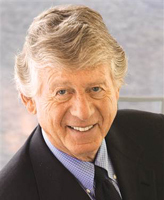 Pioneering journalist Ted Koppel will visit the University of Notre Dame on October 12 for a public discussion of contemporary journalism, politics, and world affairs. The event is sponsored by the John W. Gallivan Program in Journalism, Ethics, and Democracy.

Koppel’s career spans more than half a century. He started out as a broadcaster at WMCA Radio in New York, then, in 1963, became a correspondent for ABC News Radio, where one of his first assignments was covering President John F. Kennedy’s assassination.

He is best known, however, as managing editor and host of ABC News’ Nightline, according to Robert Schmuhl, the Walter H. Annenberg-Edmund P. Joyce Chair in American Studies and Journalism and director of the Gallivan program. Koppel led Nightline from 1980 until 2005.

“Nightline established new standards in television news by examining subjects in depth, largely because of Koppel’s intrepid reporting and probing interviews,” Schmuhl says. “Today, as a special correspondent for Rock Center on NBC and as a commentator for NPR, he continues to contribute original insight and informed intelligence to the television and radio airwaves.”

Koppel’s many achievements include 41 Emmy Awards, eight Peabody Awards, and 10 DuPont-Columbia Awards during his 42-year tenure at ABC News.

The October 12 talk is, in fact, not Koppel’s first trip to the University. He presented a lecture entitled “Journalism: It’s as Easy as ABC” in 1999 as part of the Gallivan Program’s Red Smith Lecture series, which brings prominent journalists to campus to discuss the craft of writing and the state of American journalism.

The talk will begin at 1 p.m. in the Hesburgh Libraries Auditorium. The event is free and open to the public.