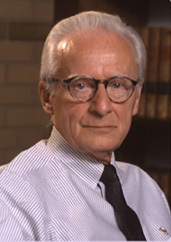 It’s the rare reader of fiction who does not at some time or other consider becoming a writer himself…some carry it about forever as an unredeemed promissory note to themselves. In their heart of hearts, they regard themselves as writers. Unfortunately, they never write anything.

- Ralph McInerny, “I Alone Have Escaped To Tell You”

Ralph McInerny — professor of philosophy at Notre Dame for more than 50 years, the Michael P. Grace Professor of Medieval Studies since 1978, former director of the Jacques Maritain Center and the Medieval Institute — is a distinguished Catholic philosopher. He’s also a widely published scholar, whose books include “Thomism in an Age of Renewal” and “The Very Rich Hours of Jacques Maritain.”

Of course he’s even better known as the author of the popular “Father Dowling” mystery series, which includes 27 titles and became a popular network TV series starring Tom Bosley and Tracy Nelson. Other series include the Andrew Broom mysteries (set in the fictional Wyler, Ind., and featuring a small-town lawyer), a series set on the Notre Dame campus (the most recent, “Irish Alibi,” was published in September), and the Sister Mary Teresa mysteries written under the pen name “Monica Quill.” His memoir, “I Alone Have Escaped to Tell You,” was published by Notre Dame Press in 2006.

By any standard, McInerny is a staggeringly prolific writer. How many novels has he written?

“I don’t know,” he says. “Over 100. I’ve got three more coming out this year. I just finished one last night and sent it off. I like to write.” Although, he adds wryly, they’re not “War and Peace.”

“Discipline is the key,” he says. “When you dream of writing, you don’t dream of hacking away day after day. The romance seeps out of it. But I’m still excited.”

McInerny saw himself as an aspiring literary writer from the time he was in his teens, first writing for his college literary magazine and later writing poems, novels and short stories — “the preferred target being the New Yorker” — through his days in college and graduate school, and continuing after he arrived at Notre Dame in 1955 to begin his career as a professor of philosophy.

He decided to get serious about fiction writing, he recalls, on Jan. 16, 1964. The decision was made for one reason only: “We needed more money,” he says. “It was as simple as that.”

McInerny and his wife, Connie, had seven children — their oldest son, Michael, died at 3.

He bought a copy of “Writer’s Digest,” and decided to write — for the commercial markets — every day for a year. If at the end of that time he hadn’t sold anything, he vowed, he would give it up and admit to himself that he wasn’t a writer.

Every night after the children were in bed, he wrote from 10p.m. to 2 a.m., standing at his typewriter at an old workbench in the basement, and mailing out stories. By April of that year, he began to see light at the end of the tunnel— messages on the rejection slips, a letter from an editor urging him to keep trying. His first sale — for $1,000 — was a short story published in Redbook Magazine, the first of many such sales. His first novel, also the first of many, was published in 1967.

It’s been more than 40 years since that first novel published, McInerny notes.

“Most people don’t write that much, or that long,” he said. “They get tired of it, or die off. Or people get tired of them.”

But he still has, in his words, “a modest but loyal following” that reads everything he writes.

“Students will say `My grandmother loves your novels,’” he says. “It used to be mom. I’ll settle for grandmother.”

Originally published by Carol C. Bradley at newsinfo.nd.edu on December 19, 2007.