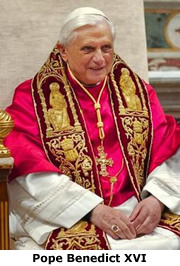 For an arcane academic lecture, it certainly made a splash:

Only a few hours after a retired faculty member returned to the University of Regensburg in Germany to speak in one of its venerable lecture halls on “Faith, Reason and the University: Memories and Reflections,” seven churches in the West Bank and Gaza had been set on fire; a 65-year-old Italian nun had been murdered, shot four times in the back as she entered a Mogadishu hospital; Morocco had recalled its ambassador to the Vatican; and the paper of record in Tehran had expressed editorial outrage about “code words for the start of a new Crusade.”

It was his post-retirement position that made emeritus professor Joseph Ratzinger’s remarks last Sept. 12 of more than passing interest to millions of people of all faiths and none, and even within the Catholic Church—over which Professor Ratzinger, now Pope Benedict XVI, presides—they have been disparaged by one commentator for their “inexplicable citation of a truly offensive five-hundred-year-old text,” and enshrined by another as an invaluable theological marker, “the Regensburg Moment.”

While his address principally concerned the relationship of faith and reason, Pope Benedict had quoted a 14th century Byzantine emperor who wrote that the ministry of Muhammad had brought things “only evil and inhuman” and that the prophet “spread by the sword the faith he preached.”

As uproar and even bloodshed ensued throughout the Muslim world, the pope several times expressed his regret for the effects of his quotation of Emperor Manuel II Paleologus, whose provocative words, he insisted, did not reflect his own disposition toward Islam.

At Notre Dame, while the pope’s remarks were received in the somewhat more reflective spirit he undoubtedly intended, faculty members discussing the Regensburglecture two weeks later had at least as much to say about Benedict’s controversial choice of citation as about his theme.

Rashied Omar, research scholar of Islamic studies and peacemaking in Notre Dame’s Kroc Institute, was the sole Muslim on the panel. Apologizing for and deploring the violent, “thoroughly reprehensible and depraved” responses of some of his co-religionists, he nevertheless objected to Pope Benedict’s use of the Paleologus quotation “to develop an overly simplistic picture of the complex and diverse Muslim theologies on the nature of God” and to illustrate a questionable assertion “that Islam, because of its utter transcendentalism is beyond the realm of the rational.”

He also expressed himself as “hopeful that Catholics and Muslims will weather this latest hiccup in their relationship thanks in large part to the strong bridges that were built between our two communities by Pope John Paul II.”

While sharing Omar’s misgivings about Pope Benedict’s reference to Paleologus, Rev. Paul V. Kollman, C.S.C., assistant professor of theology, observed that what the Pope had to say about Islam was “more of an aside than a main point.”

Alluding to the influences of North Africa, Egypt and Asia on the developing doctrines of the early Church, Father Kollman questioned the Holy Father’s celebration of the “inner rapprochement between biblical faith and Greek philosophical inquiry” and his insistence that “Christianity, despite its origins and some significant developments in the East, finally took on its historically decisive character in Europe.”

Insisting that the pope’s remarks at Regensburg were “not infallible, inerrant, dogmatic or even, strictly speaking, doctrinal,” R. Scott Appleby, John M. Regan Jr. Director of the Kroc Institute, said that despite his “delivering a lecture for a specific occasion ratherthan addressing the universal church on the subject of a doctrine revealed by Christ,” the Holy Father had been “less than artful, even naive” in pursuing his stated intention to open a dialogue with Islam. “It is less than artful, because it is too opaque, too refined, and too academic a lecture for a topic this volatile,” Appleby said.

Pope Benedict had already conspicuously shown his good faith for initiating such a dialogue, said Brad Gregory, associate professor of history, who praised the Regensburg lecture for its “concise, challenging reflection on a Catholic understanding of the relationship between faith and reason as seen historically and inter-religiously.” Not only has Benedict been courteous to Islam, according to Gregory, but he “has repeatedly reached out to Muslims and Muslim religious leaders, distinguishing between Islam and the use of violence in the name of religion.”

He cited kindly remarks made during a papal address given to religious leaders the day after Benedict’s election and an address to "dear and esteemed Muslim friends given by the pope during the celebration of World Youth Day last summer in Cologne.

Alone among the panelists, David Solomon, W.P. and H.B. White Director of Notre Dame’s Center for Ethics and Culture, disavowed attempts at “investigating or speculating on Pope Benedict’s motives or deep intentions” and recommended that “we should simply look at what he says.”

Acknowledging that his message might not be warmly received by the contemporary academy, Solomon said that Pope Benedict at Regensburg was “accusing modern men and women of being insufficiently attentive to the demands of reason—and his accusation is put forward in the idiom of rational argumentation.”

According to Solomon, the Pope’s accusation was enhanced by his lecture’s inclusion of “a brilliant but brief history of how we came to suffer from this widespread unwillingness to listen to reason.” If any fault could be found with the pope’s remarks, it was due to an agreeably “culpable innocence in supposing that his message might provoke a reasonable debate.”

Originally published by Michael O. Garvey at newsinfo.nd.edu on January 19, 2007.