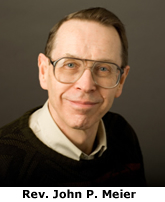 Before he became Pope Benedict XVI two years ago, and even before he became famous for his direction of the Congregation for the Doctrine of the Faith, Cardinal Joseph Ratzinger was a prolific theologian whose dozens of books were widely and respectfully read. In 2003 he began yet another book on what he calls his “personal search for the face of the Lord.”

On April 16, Pope Benedict’s 80th birthday, the 448- page book, “Jesus of Nazareth,” went on sale in European bookstores. The English-language edition is set for release May 15. The pope insists that the book is his own and not an official assertion of Catholic doctrine, adding, “Everyone is free, then, to contradict me.”

That is a daring invitation for any pope to make in an age of Web logs. At Commonweal magazine’s dotCommonweal site commonwealmagazine.org/blog/, Father Robert Imbelli, a theologian from Boston College, cheerfully took up the papal challenge, noting that Pope Benedict had wrongly identified Rev. John P. Meier, Warren Professor of Theology at the University of Notre Dame, as a Jesuit.

But what a happy fault it was!

The papal error came to light in a passage translated by Italian religion journalist Sandro Magister in which Pope Benedict lists the “most important recent books about Jesus.” He mentions approvingly the works of German theologians Joachim Gnilka, Klaus Berger, Heinz Schrmann, Thomas Sding, and Rudolf Schnackenburg, but singles out Father Meier’s book, “A Marginal Jew: Rethinking the Historical Jesus,” for special praise.

“This multi-volume work by an American Jesuit represents in many ways a modelof historical-critical exegesis, and clearly displays both the importance and the limitations of this discipline,” the pope wrote.

Father Meier, not a Jesuit, but a priest of the archdiocese of New York, was too pleased by the compliment to mind the slight misidentification one bit.

“I was deeply moved when I read that Pope Benedict has graciously included “A Marginal Jew’ among important recent books about Jesus,” he said. “Still more moving is the fact that he lists me among exegetes who have always been for me exemplars of what Catholic New Testament scripture scholars should be:people who see the life of faith and the life of the intellect as two coherent parts of a greater whole, not as two competing, hostile forces.”

According to Father Meier, "exegetes like Rudolf Schnackenburg, Heinz Schurmann, and Joachim Gnilka have been my private heroes from early on in my academic career. To be so much as mentioned in the same sentence with them—-and, indeed, by the pope—-is a gift that will stay with me for the rest of my life.

“One final point: All the other scholars mentioned by the pope are Germans. The kind notice that the pope has taken of my work is a tribute to the maturation of Catholic Scripture scholarship in the United States in general and—not being an alumnus, I can say this with all due sobriety and objectivity—here at Notre Dame.”

A member of the Notre Dame faculty since 1996, Father Meier studies, teaches and writes on the New Testament, specifically the historical Jesus and Matthew’s Gospel, as well as Palestinian Judaism in the first century A.D. The first three volumes of “A Marginal Jew” were published in 1991, 1994, and 2001, respectively. Now on sabbatical leave, he is at work on the fourth volume in the series. He also has written six other books and more than 60 articles for journals and textbooks. A past editor of The Catholic Biblical Quarterly and New Testament Studies, he also serves on the editorial board of Dead Sea Discoveries.

Originally published by Michael O. Garvey at newsinfo.nd.edu on April 23, 2007.