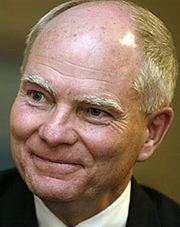 This semester, he adds professor to his impressive rsum.

But the prospect of becoming an adjunct professor of political science at the University never crossed his mind.

“Having the opportunity to be a member of the faculty here is … something that I never thought, never imagined would happen … I’m so excited to be able to participate and hopefully make a difference.”

Kernan’s one-credit course, titled “The Executive Branch and Public Policy,” explores the practical application of a political science education, while providing guidance to those who might enter into politics after graduation.

“[In class] we will typically talk about a particular topic having to do with public policy, through the perspective of the executive branch, because that’s where I spent all my time,” he said.

Elected mayor of South Bend in 1987, Kernan served for nine years. In 1996, he was elected lieutenant governor and, after Gov. Frank O’Bannon’s death in 2003, became governor.

Although he did not initially intend to run for any office, Kernan was attracted to the subject of political science even in college.

“Fundamentally, my parents had always taught us that public service and a career in politics were important and, as citizens, we have a responsibility to participate. … For me, it goes back to my major, really just because that was what I enjoyed. The courses that I enjoyed are what drew me to it. I guess the fit was somewhat natural.”

Kernan hopes to take what he has learned and translate it into a positive learning experience for his students.

“While there’s a great deal you can learn from books and professors, while it provides a good foundation for moving on into what comes next, practical experience and practical advice can be very helpful,” he said. "Hopefully [the course] helps to give [the students] a flavor of what it’s like and gives them a better idea of where they might want to go, what they might want to try.

“Furthermore, if I can be of assistance in helping to give some advice as to how they might go about getting internships or looking for opportunities after they graduate, I would be more than willing to help in any way I can.”

Thus far, students have reacted positively. John Roos, acting chair for the Department of Political Science, says, “Informally several students have told me that they are finding it a great experience … Plans are for Joe to offer some talks in the fall, and then repeat this course next spring.”

Kernan, for his part, loves the role he is in right now and looks forward to the future.

“I certainly would like to continue to teach, as long as I’m welcome.”