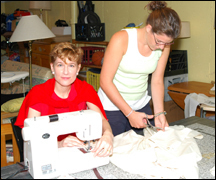 Americans don’t know how to dress, says Linda Przybyszewski, associate professor of history at the University of Notre Dame—their clothing is too tight, too big, or inappropriate for the occasion.

The title of her book-in-progress is a little more blunt: “Nation of Slobs: How Americans Learned—and Forgot—How to Dress.”

A colleague suggested she called the book “What Not to Wear,” she says, “But that was already taken,” by the popular cable TV makeover show.

But Przybyszewski (pronounced preh-beh-SHEV-ski) does have a lot in common with style gurus Stacy London and Clinton Kelly—she goes through life wishing she could make over other people’s ill-fitting outfits.

The book is a bit of a departure for Przybyszewski, a legal scholar whose previous books include a biography of Supreme Court Justice John Marshall Harlan, lone dissenter in Plessy v. Ferguson (1896), which upheld Southern segregation statutes.

But Przybyszewski has sewn since she was a little girl and still makes most of her own clothes (“I don’t make sweaters, and I can’t cobble shoes,” she clarifies). Something resonated when she came across a 1950s home economics textbook, “Clothes for You,” by Mildred Graves Ryan and Velma Phillips—“the dress doctors,” she calls them.

Ryan and Phillips’ book taught young girls both the art of dressing and the art of life—sewing, design and color theory, grooming, budgeting. They’re skills girls have missed out on since the disappearance of home economics from school curriculums in the 1970s, Przybyszewski says.

The textbook inspired both her own new book and the University Seminar she’ll teach this fall, “Fashioning the Self: Identity, Aesthetics, Economics and the Clothing of the Human Form.”

Students today live on the other side of two dress revolutions, Przybyszewski notes—the 1920s, when women rebelled against the painful corsets and hourglass figures of the 19th century, and the 1960s, when informality in dress became the norm, “and everything fell apart.”

There used to be a difference between city and country dress, and between day and evening dress, she notes. People used to dress up for church and for funerals. Employers today have to cope with young employees who can’t distinguish between appropriate attire for the beach and for the office.

In exploring the rules of the art of dress from previous eras, Przybyszewski realized that you have to have your clothing tailored, or make it yourself, to apply the rules—you won’t find the right color, the right fabric, the right fit in off-the-rack merchandise.

“Dressmakers feel sorry for people who don’t sew,” she says. “Most people are dependent on ready-to-wear sizing—they don’t realize their clothing could be made to fit.”

This summer, Przybyszewski and niece Ursula Adams were busy sewing muslin copies of women’s dresses and loungewear from different fashion eras for her upcoming class.

Her students will likely be easy to spot on campus this fall. One assignment will be to dress in typical 1950s-style student dress—tweed jackets and ties, poodle skirts and twinsets with sensible oxfords and the like—and report back on the reactions they get.

The class—and the book—will be a lot of fun, Przybyszewski adds.

“I’ve sewn my whole life and loved it,” she says. “I’ve learned a lot. I never thought I would be using two very different parts of myself—sewing, and history and research.”

And for those who would like to have better-fitting clothes, she does have a tip: Think separates.

“Buy for the hips—it’s easy to fix the waist,” she says. “You can take things in, but there’s no room in the fabric to let things out. If you can’t do alterations yourself, find a tailor.”

Sewing is not that hard to learn, she adds. “People think it’s hard to sew, but they’ll spend hours miserable in the mall looking for something to wear.”

Originally published by Carol C. Bradley at newsinfo.nd.edu on August 25, 2008.