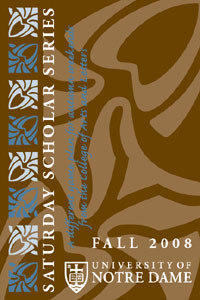 The eighth annual Saturday Scholar Series at the University of Notre Dame will feature lectures by leading faculty members on each home football game weekend this fall.

Sponsored by the College of Arts and Letters, the lectures add a scholarly dimension to a weekend roster of athletics, pageantry and fine arts performances.

The lectures will begin three and one-half hours before kickoff and take place in the Annenberg Auditorium of the Snite Museum of Art. They are as follows:

Sept. 6 “Faith Taking Shape: Early Christianity and the Arts,” with Thomas Noble, professor and chair of history. God told Moses not to make “graven images,” and although it would seem logical that Christianity would not have developed figural arts, around the year 300, writers began to build powerful arguments for and against the creation and display of Christian arts. Noble will explore how and why Christians learned to talk about art and what they actually said.

Sept. 13 “Peter Pan as a Cultural Icon,” with Susan Ohmer, William T. and Helen Kuhn Carey Associate Professor of Modern Communication. Because artists have retold the story of Peter, Wendy and the lost boys in different media and different time periods, the character of Peter Pan lives in our imaginations as the boy who wouldn’t grow up. Ohmer will discuss various narratives of “Peter Pan,” how the tale has changed over time and what it tells us about changing attitudes about childhood.

Sept. 27 “Elections 2008: Race, Religion and Gender,” with David Campbell, John Cardinal O’Hara, C.S.C., Associate Professor of Political Science; Darren Davis, professor of political science; and Christina Wolbrecht, associate professor of political science. The 2008 presidential campaign has reshaped the American political landscape and has challenged old assumptions about the roles played by race, gender and faith in politics. The talk will offer fresh perspectives on the 2008 campaign and discuss what it has meant for campaign politics, how it might affect the future of American politics and what it will mean on Election Day.

Oct. 4 “The Sub-Prime Mortgage Mess and Federal Reserve Policy,” with Christopher Waller, Gilbert F. Schaefer Professor of Economics. The worst since the Great Depression, the current credit market crisis in the United States has lasted for more than a year, driven in large part by the sub-prime mortgage mess that has led to massive losses in the banking sector. Waller will discuss what caused the crisis and the effects of unprecedented intervention by the Federal Reserve.

Nov. 1 “Catholics and Evolution: Old Tensions and New Directions,” with Phillip Sloan, professor of liberal studies. Are Catholics committed to supporting “Intelligent Design” against evolutionary theory? Sloan will examine the history of the response of Church officials to Darwin’s theory and summarize the most recent reflections in Catholic circles and in the official statements of the Vatican.

Nov. 22 “Before and Beyond Modernism: Icons as Art,” with Charles Barber, professor and chair of art, art history and design. The icon is both ubiquitous and a highly successful medium for religious art with visual qualities that appear archaic and strange. Yet, it also embodies the comfort of a timeless tradition and can be found in churches and homes of all denominations. Barber will discuss these qualities in light of modernist aesthetics and postmodern theology.