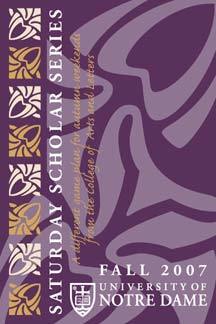 The seventh annual Saturday Scholar Series at the University of Notre Dame will feature seven lectures by leading faculty members on each home football game weekend this fall.

Sponsored by the College of Arts and Letters, the lectures were initiated by Mark W. Roche, I.A. O’Shaughnessy Dean of the college, to add a scholarly dimension to a weekend roster of athletics, pageantry and fine arts performances.

The lectures will begin three and one-half hours before kickoff and take place in the Annenberg Auditorium of the Snite Museum of Art. They are as follows:

Sept. 1 “Why is Goethe’s ‘Faust’ the Greatest Work of German Literature?” with Vittorio Hsle, the Paul G. Kimball Professor of Arts and Letters. In 1808 the German poet Johann Wolfgang von Goethe published the first part of his dramatic poem “Faust,” which soon was hailed as one of the greatest works of world literature. Hsle will examine how Goethe managed to integrate psychological, social, political and theological insights into this drama about a pact between a man and the devil for the purpose of gaining knowledge.

Sept. 22 “Health Care Reforms: An Economist’s Assessment,” with William Evans, Keough-Hesburgh Professor of Economics. Americans spend some $6,000 per person for medical care services, or roughly one-seventh of the gross domestic product figures that are twice what typical developed countries spend on health care. Despite these expenditures, the U.S. has substantially lower life expectancy than other countries, and 45 million Americans have no health insurance. All current presidential candidates list health care reform as a top priority. Evans will summarize the issues that a successful health care reform package must address, outline key proposed reforms, and discuss likely economic consequences of reform packages.

Oct. 13 “Global Ireland: From Celtic Twilight to Celtic Tiger,” with Luke Gibbons, professor of English. A country with a long history of conflict, underdevelopment and emigration, Ireland experienced in the 1990s an economic boom that placed it at the highest levels among developed nations. Instead of emigration, it has become a magnet for unprecedented levels of immigration at a rate eight times that of the U.S. Gibbons will examine the implications of these transformations in Irish culture and the need for renewal in self-images of the Irish, both at home and abroad.

Oct. 20 “Combating Extremism: Democratic Virtues and Pluralism in Islam,” with Asma Afsaruddin, associate professor of Arabic and Islamic studies. The belief that Islam and democracy are incompatible is fairly widespread in the U.S. Ironically, this view also is current among extremists in the Muslim world today. Afsaruddin will interrogate such assumptions through an exploration of the notions of pluralism as found in the Qur’an, and of the notions of good governance as expressed in Islamic thought and praxis.

Nov. 3 “Cops, Protest and Rioting,” with Daniel Myers, professor of sociology who specializes in collective violence and the diffusion of social processes. When authorities intervene in a protest or riot, do they calm things down or do they simply fan the flames? Myers examines patterns in past violent outbreaks that demonstrate how police can better prevent events from escalating into full blown rioting.

Nov. 10 “Theology vs. Religion: The Case of John Milton,” with Stephen Fallon, chair and professor in the Program of Liberal Studies. Despite writing about himself extensively and repeatedly, John Milton, one of the world’s greatest poets and the archetypal Puritan poet, resolutely avoids the obligatory Augustinian narrative of sinfulness and conversion universal among his contemporaries. The doctrine of fall, grace and regeneration around which is built his great epic, “Paradise Lost,” has no discernible effect on his self-understanding. Despite his emphasis on theology, Milton, Fallon will argue, is not a religious writer.

Nov. 17 “Words and Music, Music and Words: The Songs of Franz Schubert,” with Susan Youens, professor of music. One of the greatest of all song composers was Franz Schubert (1797-1828), who composed more than 600 songs from poems. Youens will discuss two pieces as examples of what music can do to and for poetry. Daniel Schlosberg, junior pianist in the music department, and baritone Ryan de Ryke will perform the two songs.