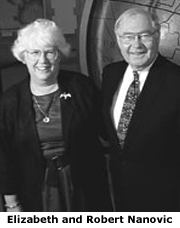 The University of Notre Dame has received a $10 million gift from Robert S. and Elizabeth Nanovic of North Yarmouth, Maine, to support the undergraduate programs of the Nanovic Institute for European Studies.

“The Nanovics have been friends and benefactors of the University for many years,” said Notre Dame’s president, Rev. John I. Jenkins, C.S.C. “The already immense debt of gratitude owed to them by all who teach, learn and live at Notre Dame has been greatly deepened.”

A 1954 Notre Dame graduate, Robert Nanovic earned a master of business administration degree from Lehigh University in 1960. Now retired from a career as an investment counselor, he has been a member of the advisory council for Notre Dame’s College of Arts and Letters since 1993. His wife, the former Elizabeth Edney, is a graduate of Hofstra University.

Established in 1993 with a previous gift from the Nanovics, the Nanovic Institute supports teaching and research in European studies. It has organized conferences, seminars and lectures by internationally recognized scholars and government officials on such issues as nationalism, citizenship, ethnicity, Catholicism and the place of Europe in the international community.

More than 100 Notre Dame faculty members from a dozen departments hold appointments as Nanovic fellows. Other institute initiatives include a visiting scholars program and research grants for faculty, graduate students and undergraduates.

The new benefaction will enable the Nanovic Institute to expand its program of teaching, research, language training and leadership formation for Notre Dame students engaged in the study of European affairs.

Among the Nanovics’ other benefactions to Notre Dame are the Nicholas S. Nanovic Scholarships, which were established in 1983 in honor of Robert Nanovic’s father.