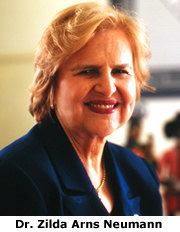 Brazilian pediatrician Dr. Zilda Arns Neumann will receive the $1 million Opus Prize at an invitational dinner at 6:15p.m. Wednesday (Nov. 8) in the concourse of the University of Notre Dame’s Joyce Center.

Notre Dame President Rev. John I. Jenkins, C.S.C., will present the prize to Dr. Neumann, who founded and leads Pastoral da Criana (the Pastoral of the Child), an innovative public health program that works with more than 265,000 volunteers to help poor families in her native Brazil.

The $1 million Opus Prize ( http://www.opusprize.org/ ) is affiliated with the Opus Group, a $1.4 billion national real estate development company headquartered in Minneapolis, and is given annually to honor a person who “combines a driving entrepreneurial spirit with an abiding faith to combat poverty, illiteracy, hunger, disease and injustice.” The award is annually presented by a Catholic college or university in partnership with the Opus Prize Foundation to provide students with inspiring exemplars of humanitarian work rooted in religious faith.

Neumann was born Aug. 25, 1943, in Forquilinha, a small community in the state of Santa Catarina, Brazil. She ascribes the inspiration for her life’s most celebrated work to the example of her mother, a German immigrant who raised 13 children while studying and practicing rudimentary medicine in the family’s home. The mother of five children of her own, she founded Pastoral da Criana in 1983 at the urging of her brother, Cardinal Paulo Evaristo Arns, then archbishop of Sao Paulo. The program takes advantage of the Brazilian Catholic Church’s ecclesial infrastructure, uniquely combining local community organizing and large-scale public health initiatives to promote the health of children and to reduce infant mortality. Dr. Neumann was nominated for the Nobel Peace Prize last year.

The Opus Prize ceremony also will honor representatives of the Office for Farmworker Ministry (OFFM) in Apopka, Fla., and the Cristo Rey Network, two other programs which blend entrepreneurial spirit and faithful service.

Sisters Cathy Gorman, Gail Grimes and Ann Kendrick, all of the Notre Dame de Namur religious community, are the founders of the Office for Farmworker Ministry, a community-based organization serving farmworker and immigrant families in Central Florida. In addition to belonging to the Sisters of Notre Dame de Namur, they also insist that they belong “to the poorest of the poor.” Since its foundation in 1971, the OFFM has established several nonprofit organizations—including health care clinics and a credit union—to support some 6,000 families in the rural Apopka area.

Rev. John Foley, S.J., is president of the Cristo Rey Network, a nationwide group of Catholic highschools providing college preparatory education to economically disadvantaged young people through work study and other programs. A Chicago native who entered the Society of Jesus in 1954, he served the Jesuit missions in Peru from 1961 to 1995, working primarily in education, before returning to Chicago to help establish Cristo Rey Jesuit High School, which he served as president for eight years. He became president of the Cristo Rey Network last year.

Also to be honored at the dinner is Notre Dame undergraduate student Benjamin Gunty, a junior in the Program of Liberal Studies who helped found Artisan Opportunities International, a company which attempts to alleviate the poverty of Nicaraguan artisans by marketing their furniture and other products in the United States. He also cofounded an online magazine, Rippleseed, which reports stories of similarly successful efforts of nonprofit organizations.

Originally published by Michael O. Garvey at newsinfo.nd.edu on November 01, 2006.