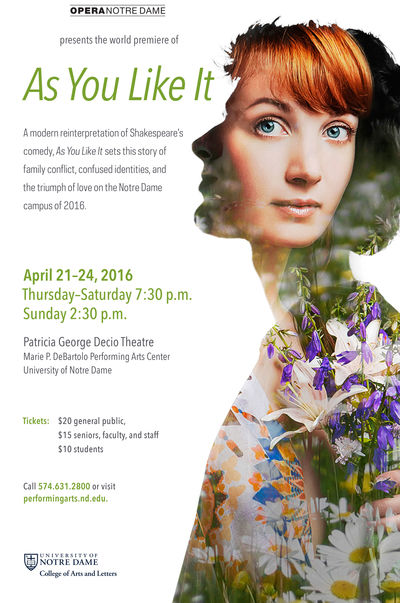 For the first time ever, the University of Notre Dame will host the world premiere of an opera—a commissioned production of As You Like It, the classic Shakespearean comedy.

“It is rare for a liberal arts program like ours—where most of our undergraduate students, even the music majors, do not necessarily aspire to careers in music performance—to stage an opera every year, which we’ve done since 2004,” said Peter Smith, chair of the Department of Music and a professor of music theory. “It is doubly challenging to stage a new work—it raises the level of ambition even higher, and our students are surpassing all expectations.”

A comedy of family conflict, mistaken identity, and love triumphing over all, As You Like It—which has never previously been adapted as an opera—features many of Shakespeare’s most famous lines, from “all the world’s a stage” to “forever and a day” to “too much of a good thing.”

Composed by renowned British musician Roger Steptoe with a libretto by Lesley Fernandez-Armesto, As You Like It is staged by veteran opera director Leland Kimball and conducted by John Apeitos, the resident conductor of the National Radio Symphony of Greece. Students involved in the production also received guidance and training from world-famous opera singers Nathan Gunn and Deborah Voigt.

Presented by Opera Notre Dame in conjunction with Shakespeare at Notre Dame, performances start at 7:30 p.m. on April 21, 22, and 23—the anniversary of Shakespeare’s death—and at 2:30 p.m. April 24 in the Patricia George Decio Theatre at the DeBartolo Performing Arts Center. Tickets are $20 for the general public, $15 for faculty, staff, and senior citizens, and $10 for students and children.

Given the location of its premiere, the production features numerous Notre Dame touchstones. The setting has been shifted from a 16th-century French duchy to a modern American college campus and the wooded area that surrounds it. The staging features iconic Notre Dame visual imagery and a silhouette of the campus skyline. A pair of characters are dressed as a Notre Dame football player and a Holy Cross priest, and a dirge featured in Act I is a reinterpretation of the Notre Dame Victory March.

In writing the libretto, the London-based Fernandez-Armesto aimed to transform dense prose into lines that were light, lyrical, and suitable for singing. Shakespeare’s words have not been changed, but the plot has been streamlined, simplified, and made more comic and contemporary.

“There are feisty female characters, brotherly conflicts, over-the-top ‘love at first sight’ moments, and bucolic feasting,” she said. “It was essential to create something that was tailor-made for Notre Dame, yet will work perfectly should the opera have a life elsewhere.”

Kimball—who has directed more than 70 productions, including in his time as general director of OperaDelaware—has significant experience with world premieres, overseeing debut performances of A Wrinkle in Time, Slaying the Dragon, and Danse Russe. Three productions he directed at Temple University won best U.S. college production awards from the National Opera Association.

Adapting Shakespeare for the opera stage has required keen focus on how words blend with music, he said. Consonants must be carefully emphasized and articulated in order to cut through the orchestral sound—but supertitles will be projected above the stage to ensure the audience can follow every word of the text.

“As with any world premiere, there are no dusty precedents or stale traditions hovering over your shoulder,” he said. “This is the first time you or the audience will have a chance to experience this work. Any and all challenges must be solved from scratch—but that is also what makes it so fun.”

Steptoe, the composer of the opera King of Macedon as well as four concertos and many sonatas, song cycles, and pieces of chamber music, is no stranger to adapting Shakespeare. His Five Shakespeare Songs premiered in 2012 and his composition of Four Shakespeare Sonnets won the Performing Right Society for Music Foundation Award in 2013.

“Setting Shakespeare’s poems or sonnets to music is one thing—creating an opera is something completely different,” said Steptoe, who lives in Uzerche, France. “It’s getting the pacing of it right, using the language well, forming the structure, making it lyrical. Music is like cooking—if you put too much salt in a dish, then it’s ruined. It has to be perfect. I truly hope this is an experience that everyone will enjoy.”

Gunn, a Grammy Award-winning baritone and an artist-in-residence with Notre Dame’s Department of Music, spent time during the fall semester with the opera workshop class, which was beginning to prepare As You Like It. Having performed in many world-premiere operas, Gunn advised the students on how to create a new role and approach material that has never previously been performed.

Voigt, an acclaimed dramatic soprano who has performed around the world, will work with the student performers for the final two weeks before the curtain rises, and she will be in attendance at the premiere.

“These are two of the top performing artists in the world,” Smith said. “Any leading music department, school of music, or conservatory would be over the moon to have such close contact with one of them, much less two.”

The visiting artists have been impressed by the talent, determination, and commitment of the Notre Dame students involved, especially since many of them will not pursue music professionally. Their broad liberal arts education, however, has prepared them to take on the demands of the premiere—and they’ve proven to be bright, resourceful, and open to learning throughout the process.

“By working on this project,” Kimball said, “they have learned to focus their attention on a difficult challenge, to work as a team on a project, to plot a learning curve and manage their time, to take care of their health and bodies, to execute detailed instructions, and to think creatively. These skills will be incredibly applicable to any future path they pursue.”