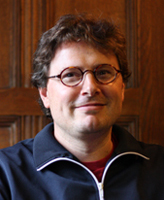 Designed to bring a worldwide audience together around Shakespeare’s plays, “The Tempest for iPad” was engineered at Notre Dame’s Center for Research Computing.

The first play printed in Shakespeare’s First Folio of 1623, The Tempest is thought to be inspired by European discoveries of the New World. Its hauntingly beautiful verse makes it among the most frequently performed and beloved of Shakespeare’s plays, and it has been selected as a theme for the opening ceremonies of the 2012 Summer Olympics in London.

The app can accommodate any Shakespeare-literacy level, from academics who want input from the world’s leading Shakespeare scholars to those who are simply curious about Shakespeare or want a lively introduction to the play.

“Our goal is to invite all readers of Shakespeare—students, teachers, scholars, fans—to gather around this magnificent play,” Visconsi says. “The iPad makes new styles of reading and writing, authoring, and sharing possible, and we designed this app to create a thrilling new way to experience Shakespeare for everyone. This app is not just for the classroom. It’s designed for anyone who loves Shakespeare, or anyone who wants to love Shakespeare but needs some help to do so.”

Readers of “The Tempest for iPad” can learn from short expert commentaries provided by the world’s leading Shakespeare scholars, artists, and teachers; enjoy a full-length, scrolling audio performance of the play by the internationally-known actors from the London Stage; or create a custom play text using key passages. The app includes illustrations, podcasts, teaching materials, and videos from the Folger Shakespeare Library, the world’s premier destination for Shakespeare research.

More than a digital book, the app is designed for social reading, authoring, and collaboration. Readers enjoy additional audio of the performance of the play that provides alternative performances of key passages, or customize their experience, using only the content and tools they want, when they want them.

“We are discovering that one of the most important components of learning at any stage of our lives is the ability to stretch ourselves just the right amount,” says Rowe. “Our app invites Shakespeare fans and potential fans to do that—it can grow with you as a reader.”

Features of The Tempest for iPad can be viewed in this video, and the app is available through iTunes for $13.99.

Visconsi and Rowe, with the support of Notre Dame and a team of investors, have created a startup company in South Bend, Indiana, called Luminary Digital Media LLC. Luminary aims to develop many more applications designed to bring together readers worldwide around core humanities texts.