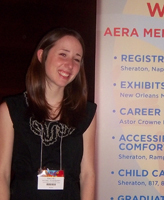 The workshop was held in April 2011, in conjunction with the association’s annual meeting in New Orleans. As fellows, the students received free registration, food, and lodging. To pay for travel, Roseberry and Kibler received Learning Beyond the Classroom grants from the College of Arts and Letters’ Institute for Scholarship in the Liberal Arts.

AERA workshop activities focused on design, methods, and applications of education research, as well as how to apply to graduate school and pursue career opportunities in the field. Fellows were paired with senior researchers who served as mentors throughout the weekend.

“It was a short but rigorous preparation for what it would look like to enter graduate school for these skills and what it means to develop your own work within a graduate program,” says Roseberry, an English major with a minor in education, schooling, and society.

Kibler, a psychology major with minors in French and education, schooling, and society, says the workshop confirmed her desire to go into education research. “It also reinforced the notion that I need to teach for several years before I do this,” she says. “It would be extremely difficult to even begin to know what to research without having firsthand experience teaching in schools.” 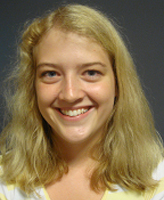 Not surprisingly, both students have already taken advantage of many opportunities for undergraduates in the College to get involved in original research.

Kibler has been working as a research assistant in an education-related cognitive development lab with Nicole McNeil, Mary Hesburgh Flaherty and James F. Flaherty Assistant Professor in the Department of Psychology; Roseberry conducted research under the tutelage of Stuart Greene, associate professor of English and director of the Interdisciplinary Minor in Education, Schooling, and Society.

Roseberry says her research project—examining summer enrichment programs for low-income students in Austin, Texas—was inspired by her work there in 2010 as part of Notre Dame’s Summer Service Learning Program. She returned over fall break to conduct additional research on the impact the summer program had on students.

“I assumed it would be almost exclusively academic-based outcomes,” Roseberry says, “but the most significant outcomes were the social outcomes—gaining confidence to explore other types of academics, interacting in group settings, the arts … [This] has a lot of interesting connotations in terms of future learning.”

Indeed, the project left her wanting to know more. “There are things I wasn’t able to answer conclusively that I would be interested in exploring in the future,” she says. 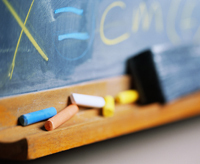 During summer 2011, Kibler will work with the Alliance for Catholic Education (ACE) as she conducts research which examines Catholic school teachers’ perceptions about critical thinking, she says.

“I think that what I will find is that Catholic school teachers feel more freedom to incorporate critical thinking into their curriculum and are more likely to see the value in doing so because critical thinking has implications for moral thought and reasoning, which is more likely to be emphasized in Catholic than in public schools,” Kibler says. “However, this is very much a preliminary hypothesis; I haven’t found any studies looking at this question, so I really don’t know what I will end up finding.”

Kibler says she found the AERA workshop to be a great motivator for her research work this summer. “The speakers got me thinking about issues that hadn’t occurred to me before,” she explains. “Also, many of the scholars were interested in the social justice aspects of education—they are still seeking to change the world. That was inspiring to me.”

For Roseberry, being an AERA fellow was a chance to network and explore the idea of pursuing a career in education research after she completes a two-year commitment to Teach For America.

“It gave me a level of confidence knowing I’m not going to graduate school right away, but I have a group of people I can reach out to if I want to talk about my work,” she says. “I want to get a sense of what’s the best way for me to contribute to the educational field.”