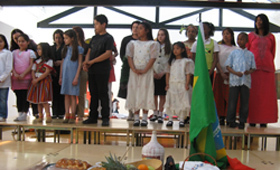 This past semester, students studying abroad at Notre Dame’s London Centre brought the mission of the University to life in a local school play that was far from the typical gymnasium fare.

Led by Anton Juan, professor in the Department of Film, Television, and Theatre, the undergraduates helped bring to the stage the stories of migrant families as seen from the perspective of the children at Sacred Heart Primary School.

“The boundaries between culture and country were completely dislodged,” student Felicia Aguirre says. “Sometimes, in a country where everything feels unfamiliar—like the migrants experiencing their new homes—all a person has to do is sit and talk to others. Despite language, dress, and cultural customs, humanity stays consistent in many different ways, such as the way in which we relate to others.”

The purpose of the theatre class, Migration Issues in Contemporary British Theatre: Theatre and Social Concerns, was to give students an “appreciation of theatre as an agent of social change,” says Juan, who has taught courses in South Bend in which students worked with the community on issues such as immigration and juvenile detention.

This past spring, with the help of the Center for Social Concerns, students in his London class were able to work with children at Sacred Heart to put their experiences into words—and live performance. The Catholic school is located in Battersea, an ethnically diverse district in south London, and so brings together myriad races, cultures, and ethnicities. For approximately 75 percent of the students, English is a second language. In this one school, Juan says, “there are 80 languages spoken and 120 nationalities of origin.”

“We may be in London,” Aguirre says, “but we get to see Italy, Africa, the Philippines, etc., through the eyes of children.”

The first-hand accounts were woven into a play, directed by Juan, titled Child of the Migrant Moon. With students from his class, the children and their families acted out their personal migration stories, lending a powerful authenticity to the joys, challenges, and troubles they faced as people living on the edge of society.

The play energized and brought together the local community, and was featured in the local Battersea newspaper. This reinforces how Juan feels both about teaching and learning—that it does not stop at the classroom door.

“The mothers said they would like to perform the piece again, and Jared Brading, the school headmaster, said he is thinking of doing a repeat for the city council next year,” Juan says. “Indeed, I have come out of this experience—as my class has—with fond memories and, even more so, a new knowledge not only to keep for ourselves but to contribute to the world.”